Since I'm so behind, for this post I'm going to take the lazy route and just describe a bunch of pictures. 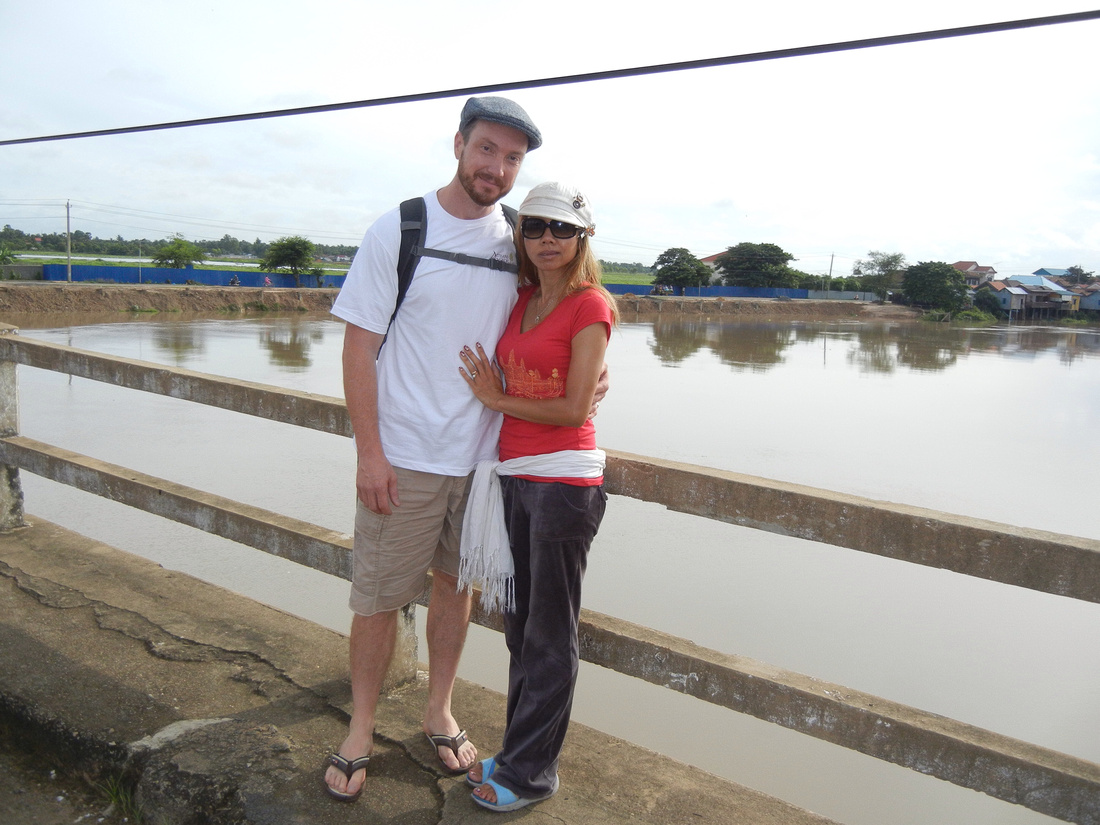 Wednesday morning Rosa and I woke up early and walked across the bridge for breakfast.  The morning was beautiful and the day started out nice.  I do admit though that I can't wait to get home to a soft bed.  It seems the standard bed here, whether cheap hotel or expensive, is hard.  My back will be grateful for my bed back home. 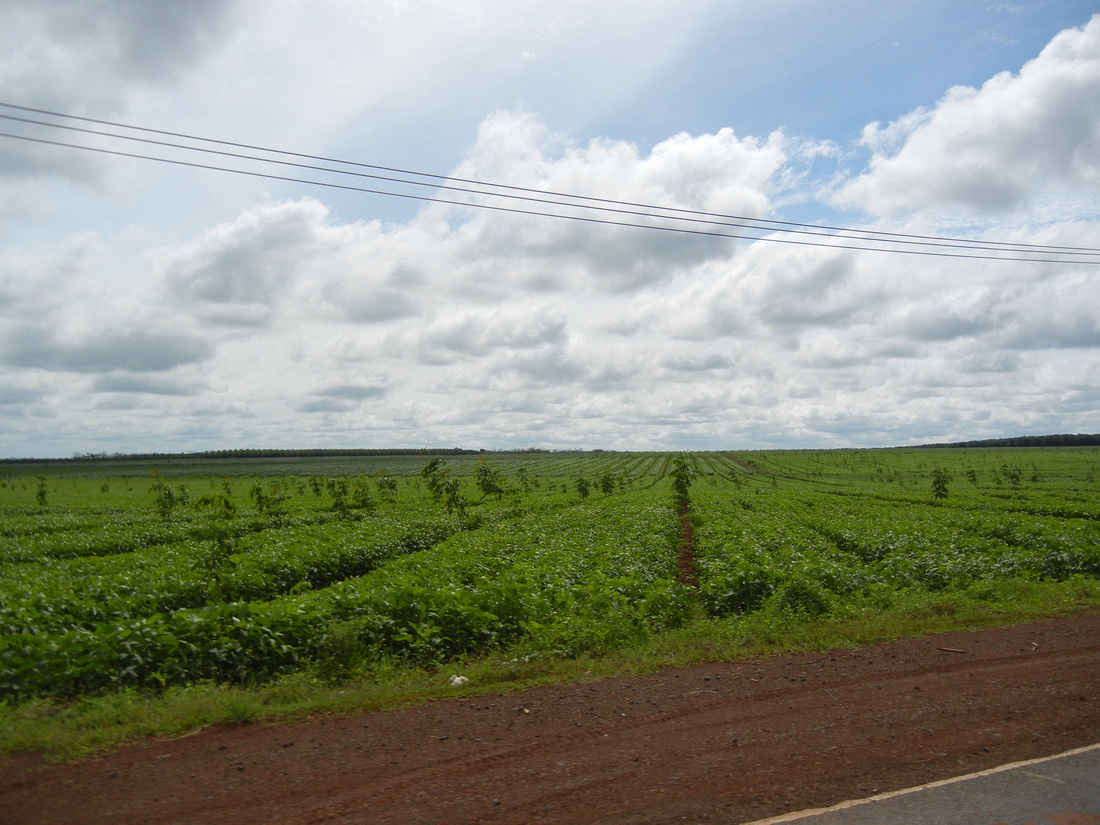 Along the way we passed fields of potatoes, corn, all kinds of fruit, hay, and of course, rice.  I believe this is a potato field. 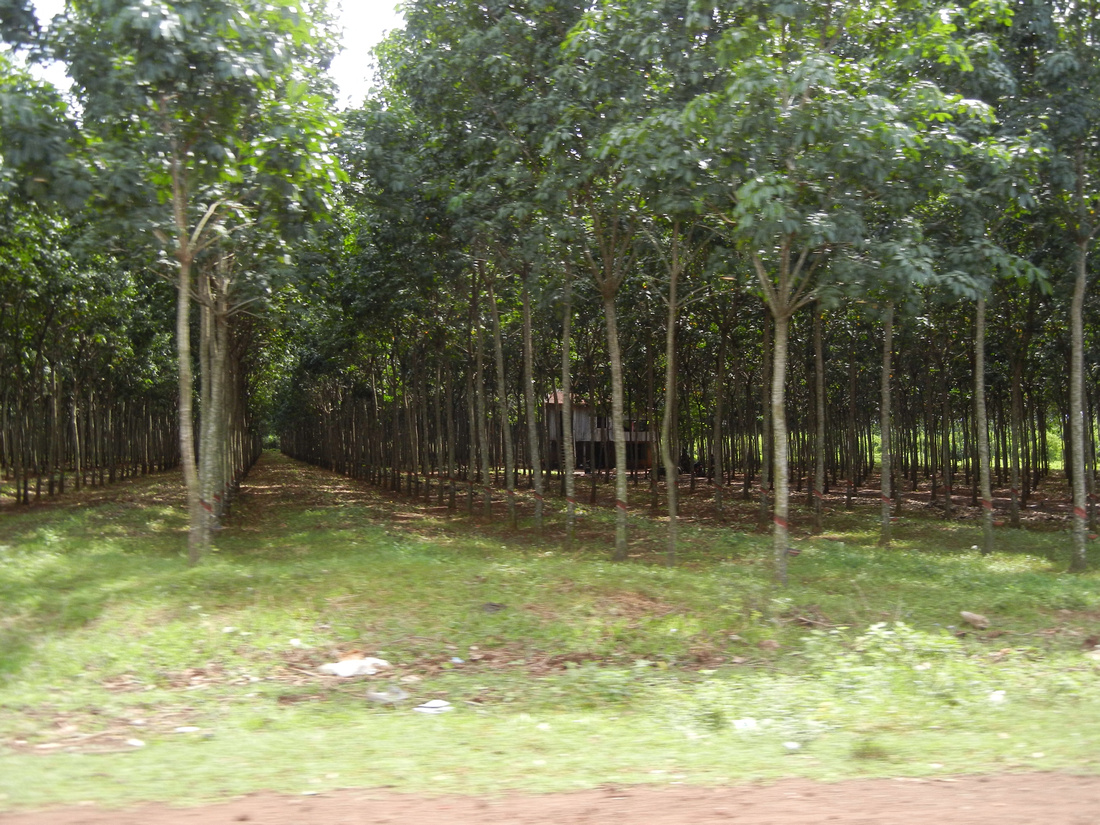 These are rubber trees grown in the Kompong Cham province. 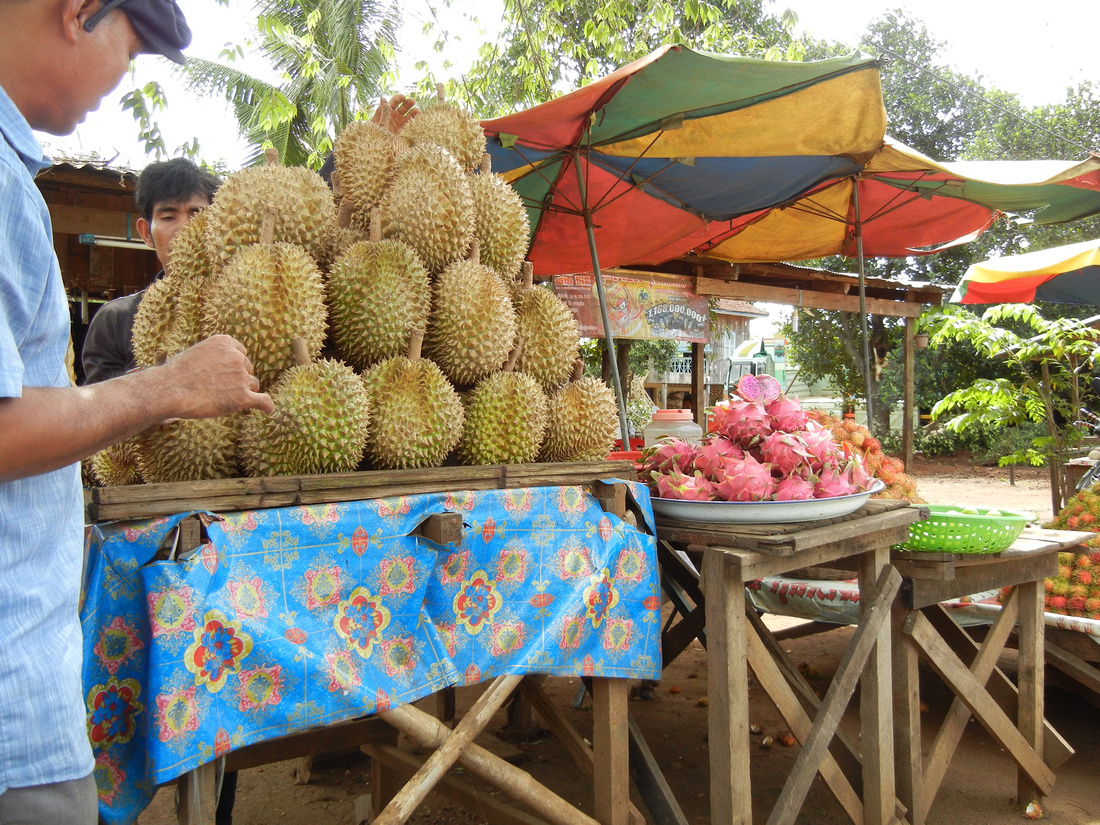 This is one of the fruit stands along the way.  This is a fruit called Durian.  It smells like a stinky diaper.  No, I don't eat this fruit.  Ever. 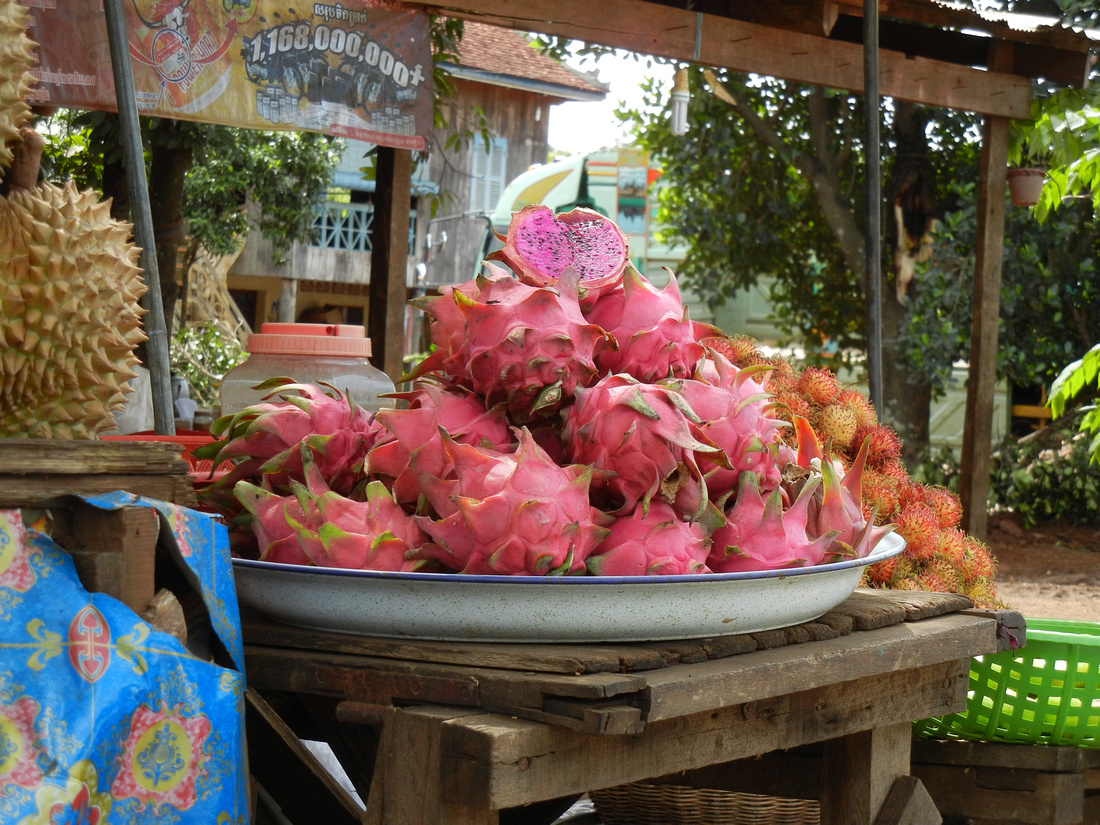 The red fruit is called Dragon fruit and it tastes like kiwi. 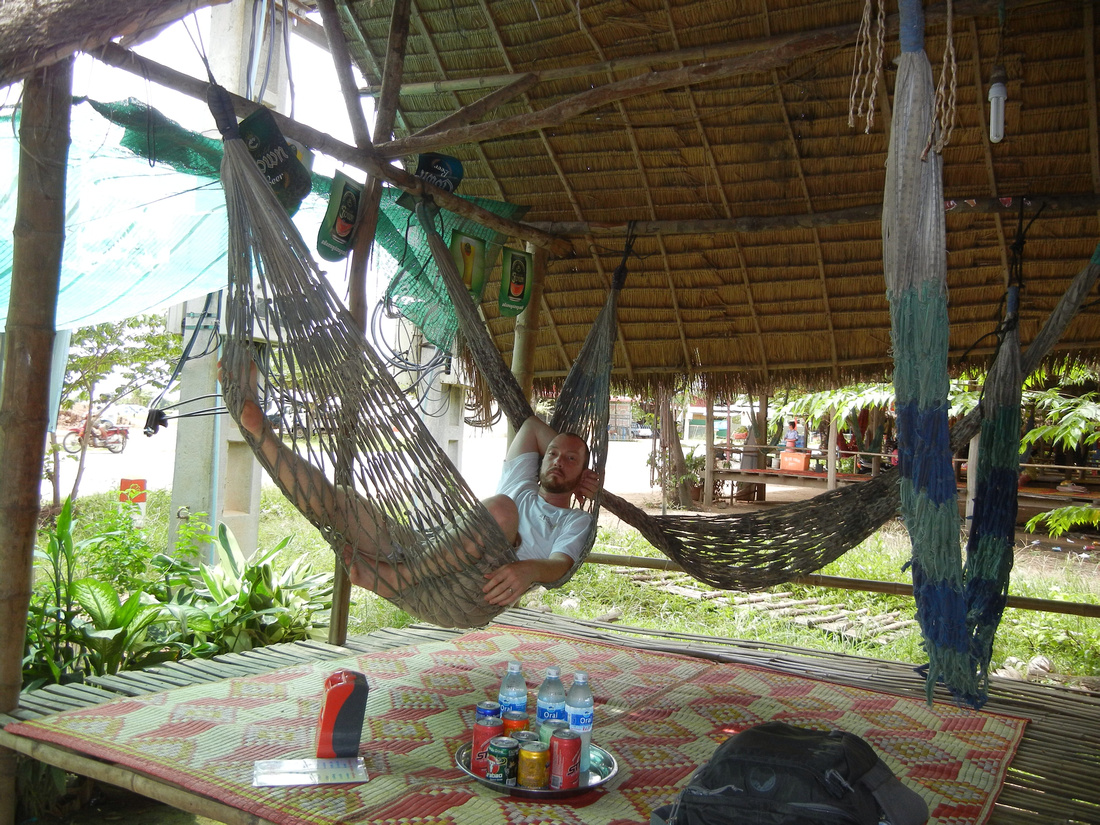 Along the way we stopped by a road-side restaurant for lunch.  This one was a bit different than the other's we had previously gone to - mostly because we ate on the floor and could relax in hammocks. 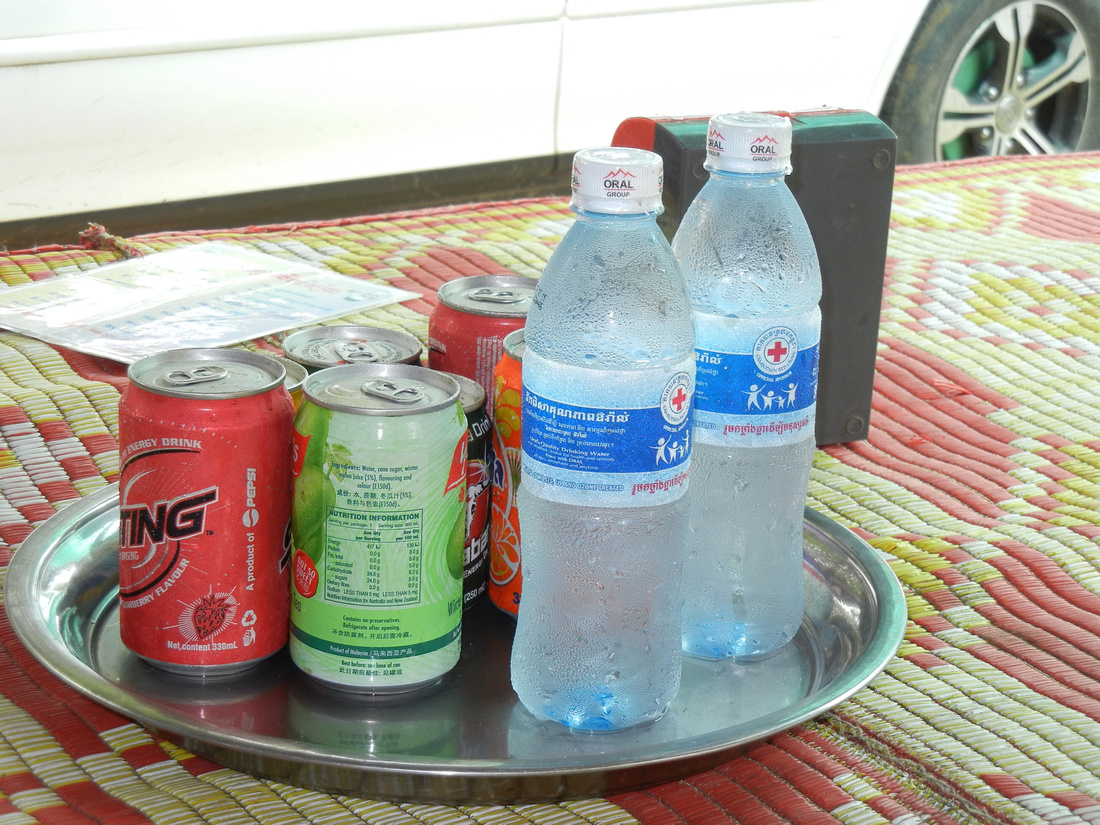 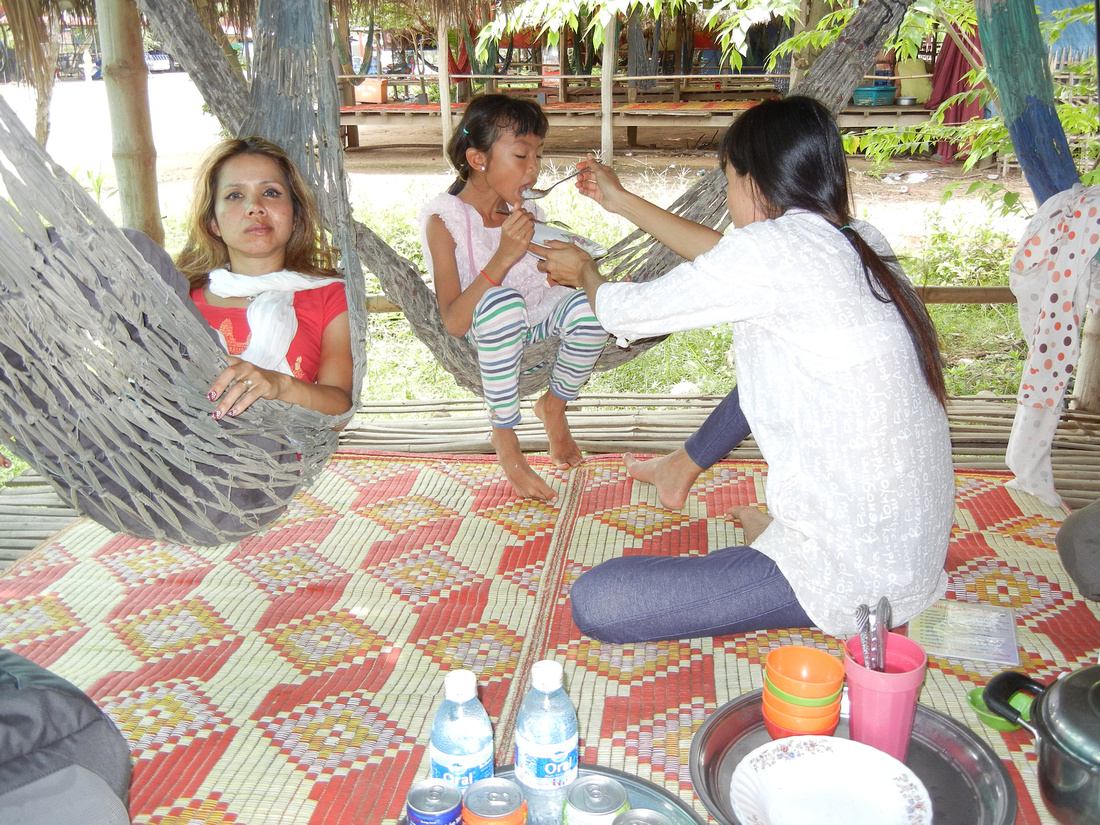 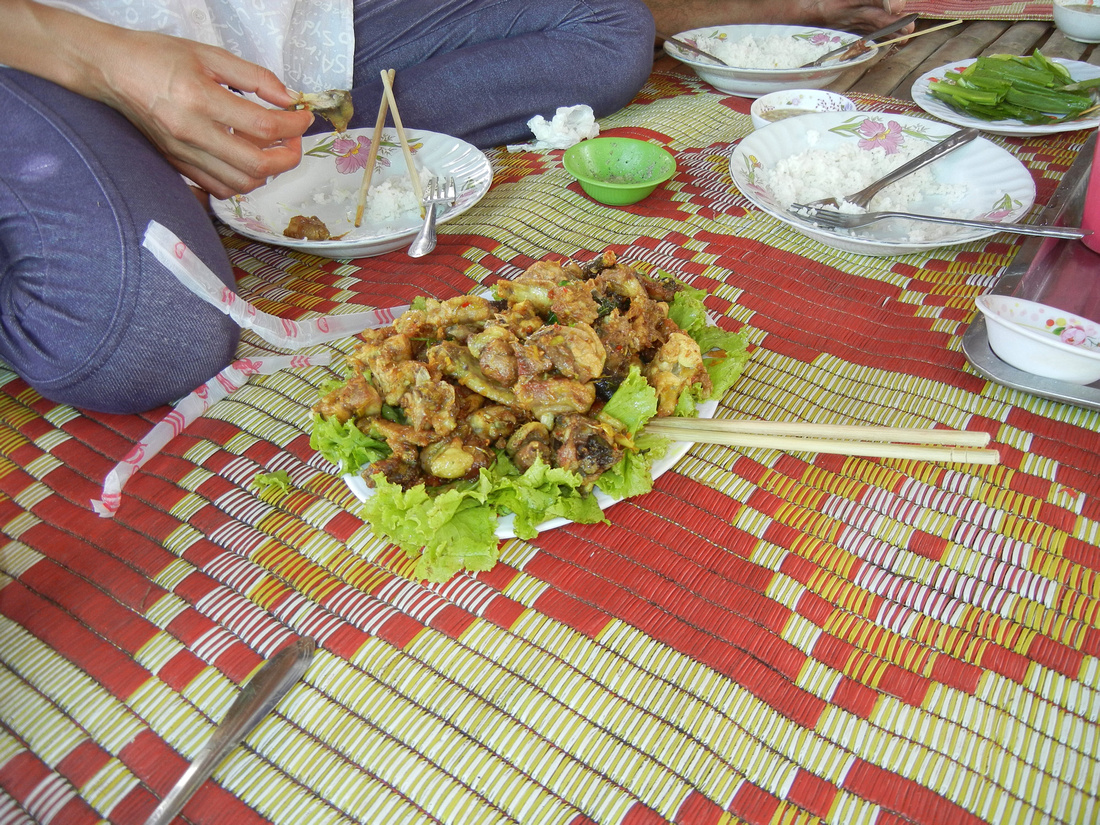 Apparently, for this chicken dish they actually killed a chicken while we were there and cooked it up.  I suppose it doesn't get any fresher. 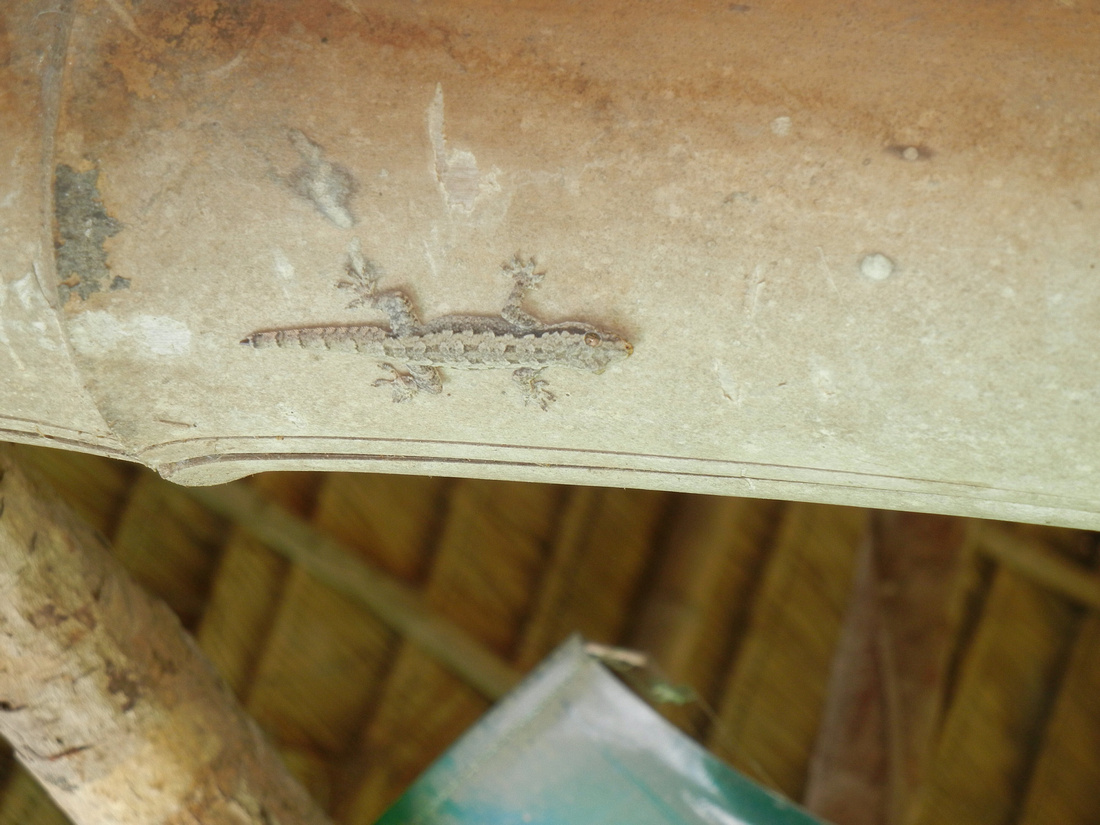 So there are geckos everywhere around here.  We got talking about them on one of the nights and I heard something that you may be interested in.  So they story goes that the geckos, specifically the Tokay gecko (say "tokay" in you head and that is kind of what the sound of the gecko sounds like).  Apparently on occation the gecko is unable to chirp as loud or as "manly" as it wants, so it opens its mouth and allows a small snake to enter in, go down and eat part of its liver - thereby relieving some of the pressure in its gut and allowing it to sing louder and stronger.  Since I doubt the snake is adept at liver surgery as the story goes, I didn't believe it for a second.  However, everyone around me swore it was true.  I did a quick search on the internet and found this link.  It tells the story better than I did but doesn't really explain it.  However, a little more searching turned up a more reasonable explaination.  It turns out that there is a small snake here that occationally gets hungry.  It knows that the gecko is pretty good at finding food and when it gets the opportunity it will wrap around the gecko and squeeze until it opens its mouth.  It then goes in and eats whatever food it can find around inside the gecko.  If the gecko is small enough and the snake is big enough, it just eats the gecko.  Anyway, this seems a much more logical explaination. 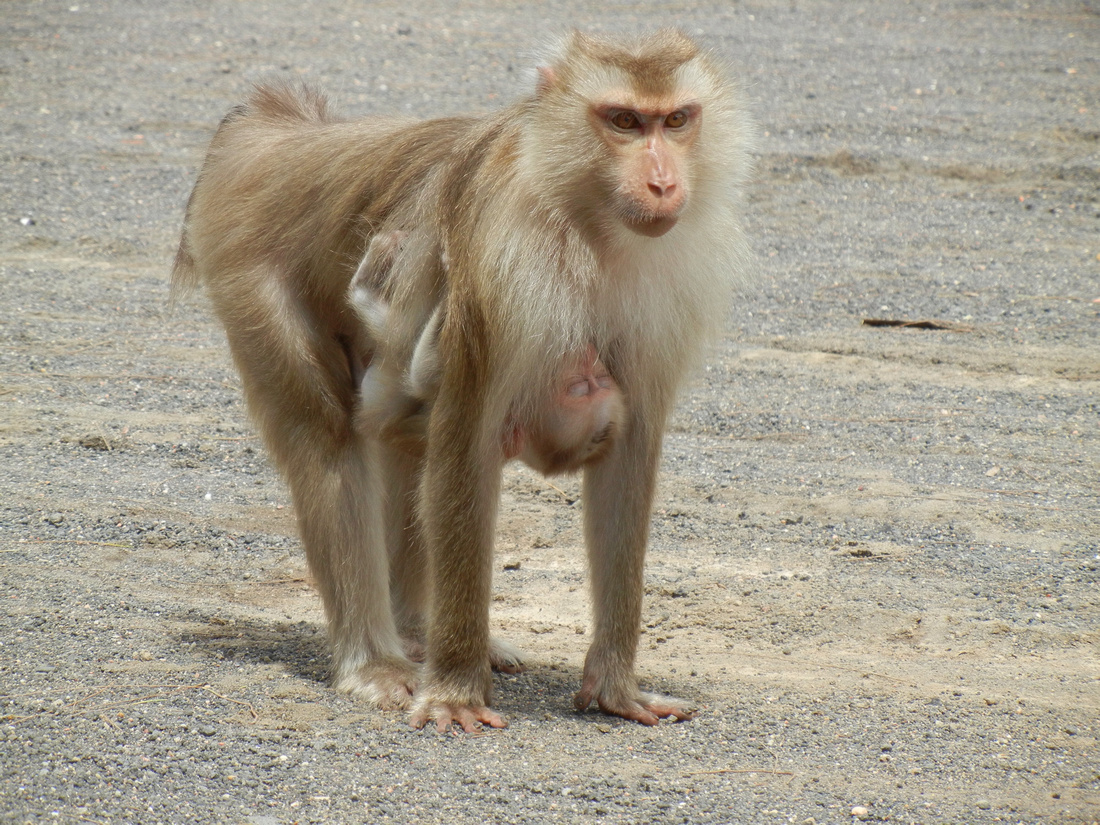 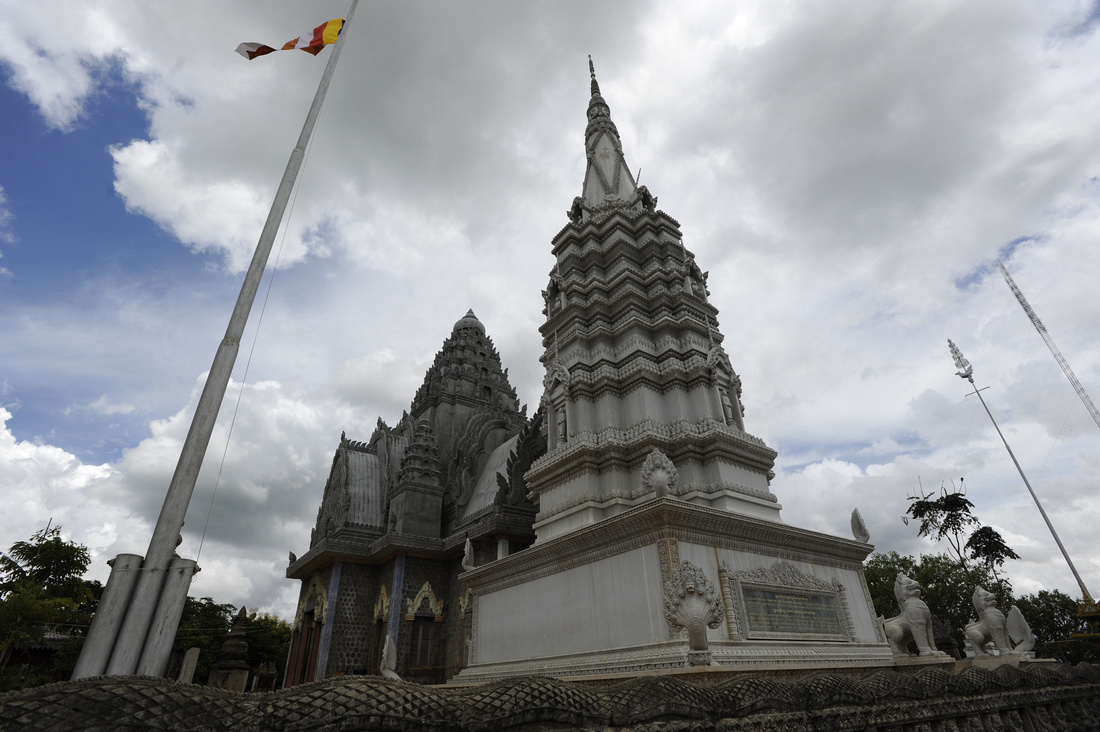 We also stopped at one of the bigger Wats in Kampong Cham for a bathroom break.  It was very pretty and was unique in that there were a bunch of monkeys running around on the ground and in the trees.  It was fun to hang out with them for a bit.

At this point we basically finished our trip into Phnom Penh.  The road between Kampong Cham and there was "bumpy".  That is to say, the road hardly existed and we were dodging giant potholes and random things in the road for most of the way there.  Needless to say, when we finally got into the big city we were very ready to find a place to rest.  Rosa's headache had come back with a vengence from the trip and so she and I checked into the first hotel we found, got a quick bite to eat, and slept until nearly 8 in the morning.

It looks like you had a good trip (minus poor Rosa's Bell's Palsy and perpetual headache). Glad you made it home safely!
No comments posted.
Loading...
Subscribe
RSS
Recent Posts
Nephi Was Commanded to Build a Boat The Final Leg Off the Grid Of Clean Feet and Water A Good Sabbath The Final Four Rest and Recuperation A Humble Abode A Rung Bell A Bit of a Homecoming
Archive
January February March April May June July August September October November December
© The Shurtz Family
Powered by ZENFOLIO User Agreement
Cancel
Continue