[Editor's note: I tried and tried to post this yesterday, but the internet just wasn't working here.  It's morning now and it seems to be up again.]

Before I get into the day’s report I want to give a quick update on Rosa. I’m writing this from the international hospital here in Siam Reap. 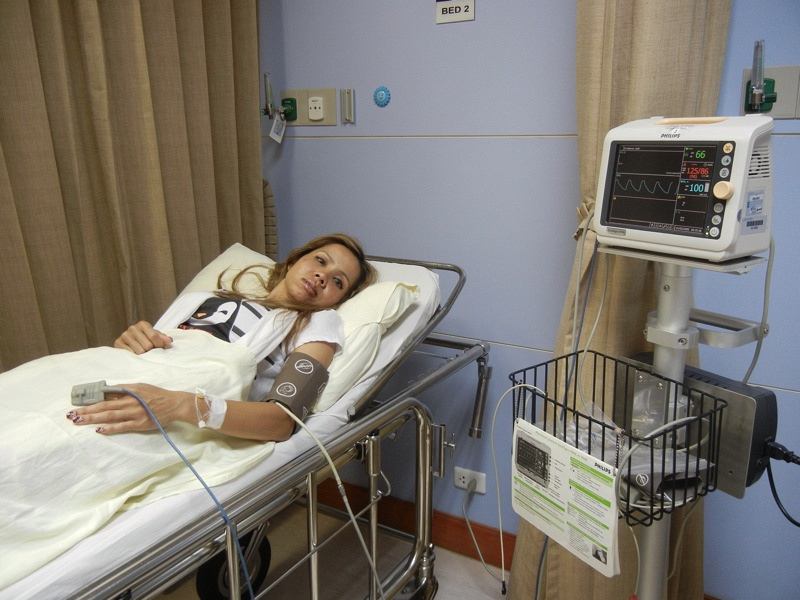 Don’t panic! All is well. Rosa’s head has continued to hurt for the past few days so we decided we’d better have them take a look at her just to be sure. They did a blood test and a CT scan and things came back normal. She has some medicine for help the nerves in her face, an anti-inflammatory and something for the pain. She also had a head massage when we got back to the hotel and that seems to have helped as well. We’ll see how tomorrow goes. By the way, if you want a good example of what affordable health care looks like, we went to the hospital and spent about 4 hours there, did blood tests and a CT scan, had the results looked at by specialists in Thailand, multiple consultations with the doctor and three different prescriptions filled. All for $216.  Not bad eh?

But today’s report will have to wait until at least the day is over. Thursday is in the books so let me give you an idea of how it went. I don’t know if I’ve talked about our hotel situation much but basically the original idea was we would come and stay the first couple of nights in a place I had reserved and then “go where the wind blows us”. It turns out that the wind doesn’t blow very hard because we’re still in the same place. Rosa likes to be comfortable, though I suppose that could be said about any of us, and our hotel here in Siam Reap is very nice and very comfortable. As hotels go around here it’s not the most expensive but it’s definitely not the cheapest either. Ours is rated 4 stars and is clean and very well ran. They have a fantastic breakfast buffet in the mornings and a beautiful pool and area in general. For $39/night you really can’t beat it. Rosa’s sister stayed in a place last time she came which was $15/night and she had reserved some rooms there again for the other family members who had come to see us. When Rosa saw their rooms she decided very quickly that she was happy where she was, thank you very much. So we added additional days to our stay and here we remain.

That was a really long way of saying that when we went to Battambang we stayed at a $15 hotel and let’s just say when you combine the room we were in with the way she felt physically she was very anxious to get back to where she was comfortable. We checked out Thursday morning and went back over to her sister Sokha’s house and we spent most of the day there before our return trip. It was very nice and I enjoyed the time there with everyone very much. Since we didn’t really go anywhere I’ll just describe some of the pictures I took around the house so you get a small idea about how they live over here. Before I do that let me tell you a little about state of living here. Generally you fall into one of two categories, rich or poor. I know that’s a pretty general statement, but from what I can tell its pretty accurate - at least from a standard of living perspective. I’ll try to take a picture of one of the nicer homes to give you an example, but those who have more money (or more likely, those who have relatives with more money) have nice, multi-story homes made from cement or brick. They are often built on their existing property so you’ll see a nice new home next to the older traditional stick built version. In the city it’s similar with the more humble homes crammed together in the alleys behind those who can afford the street front dwellings. Most people in the city rent their space but are responsible for the maintenance and improvements themselves. Generally multiple generations live together and they make use of all the space available to them. Rosa’s family definitely falls more into the humble category, but they are very happy and live comfortable lives given what they have to work with.

Rosa’s sister lives in Battambang city and her home has two stories and two families that live there. The adjacent home is where Sokha’s daughter’s husband’s mom and son and his family live. 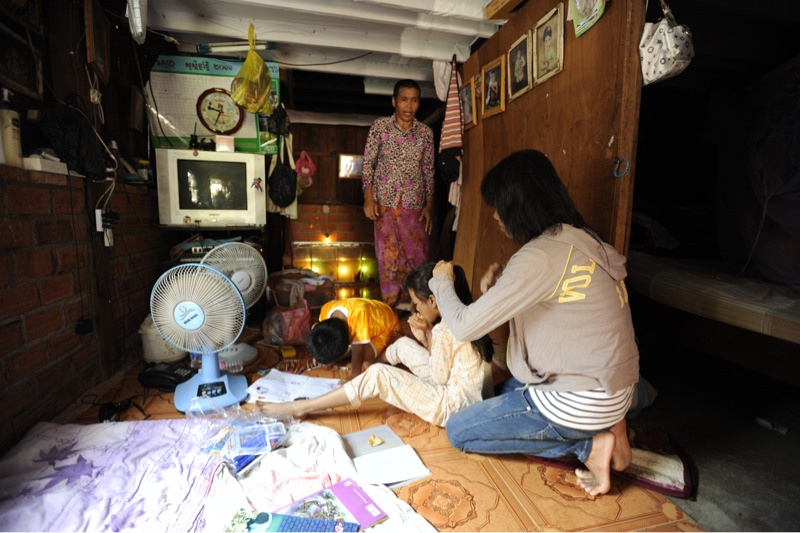 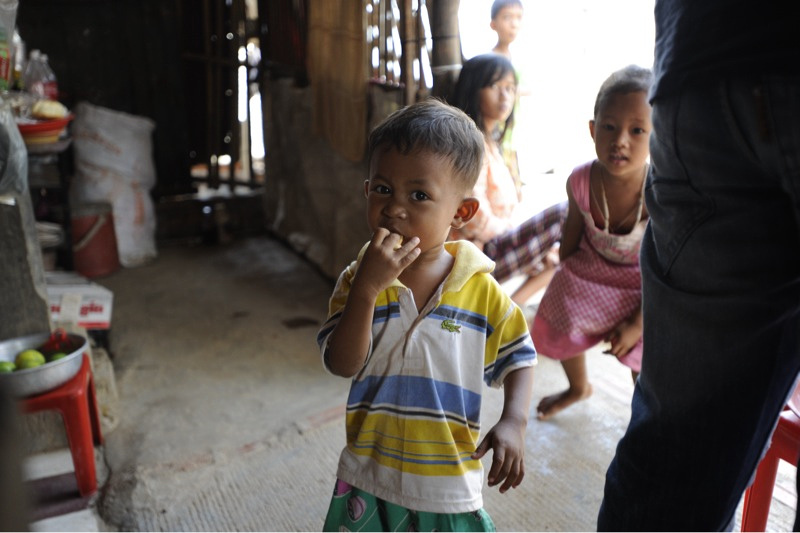 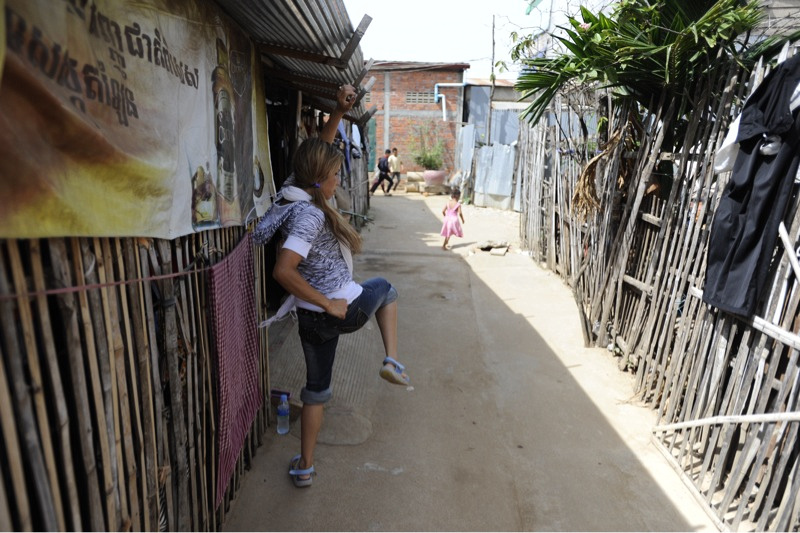 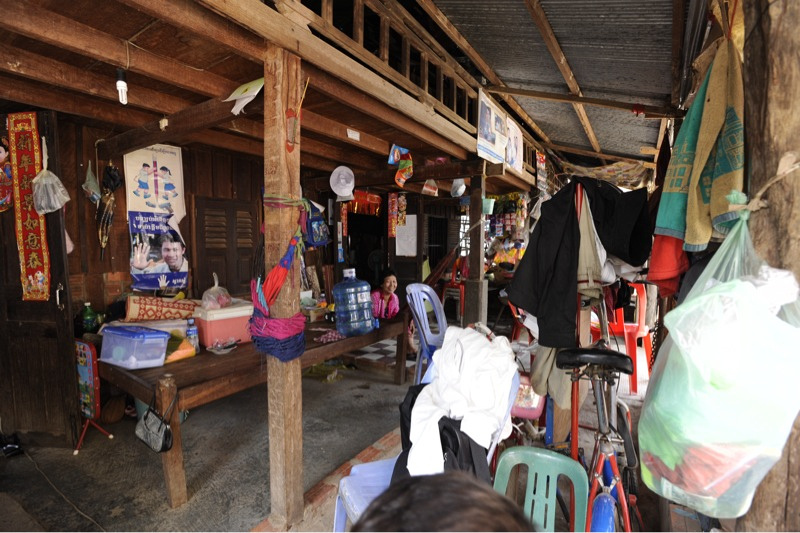 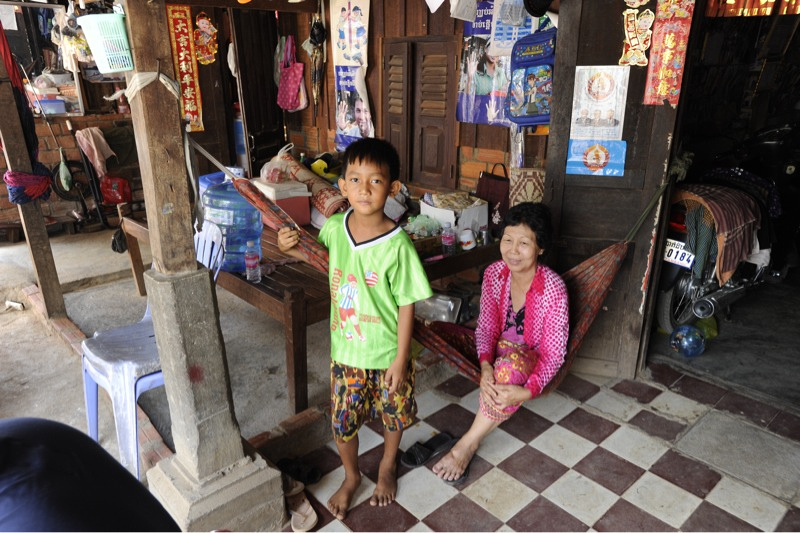 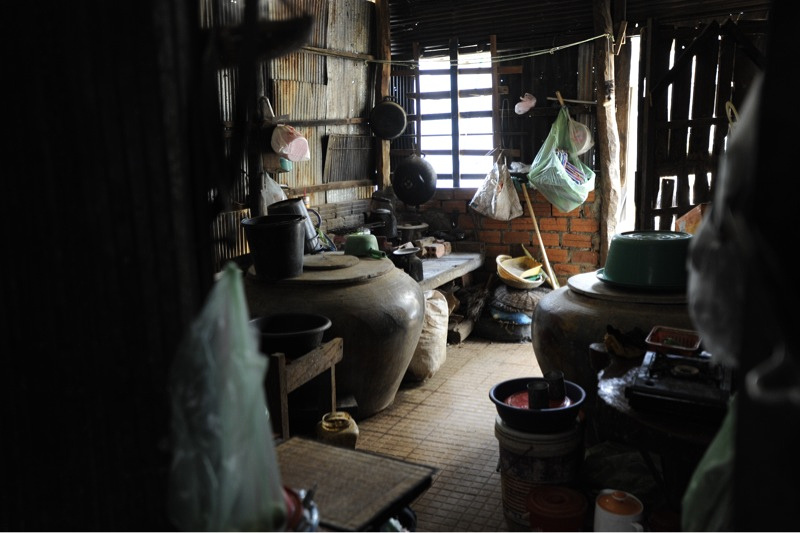 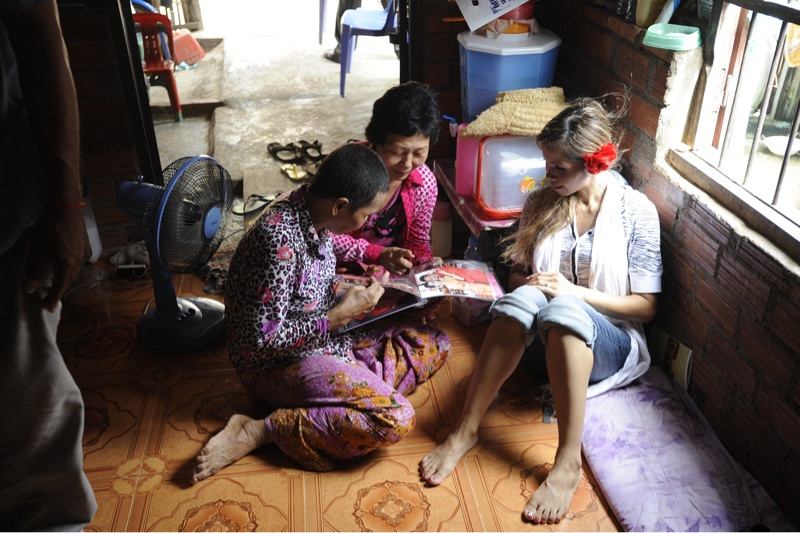 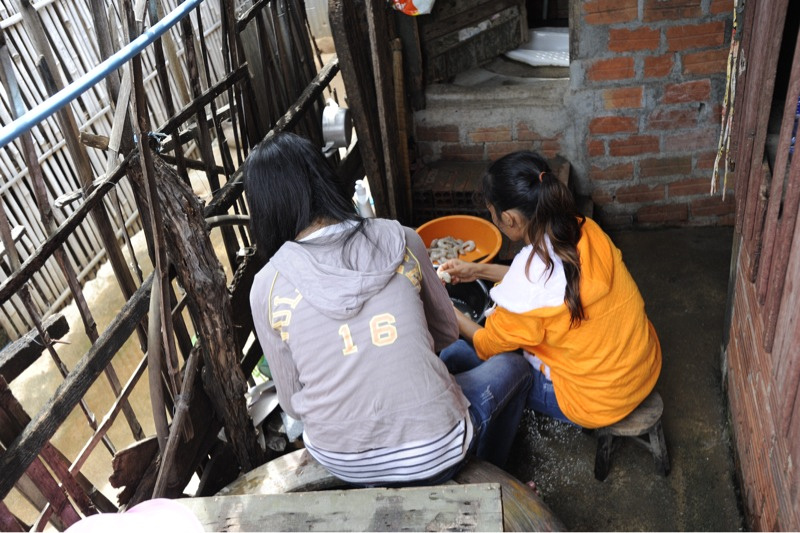 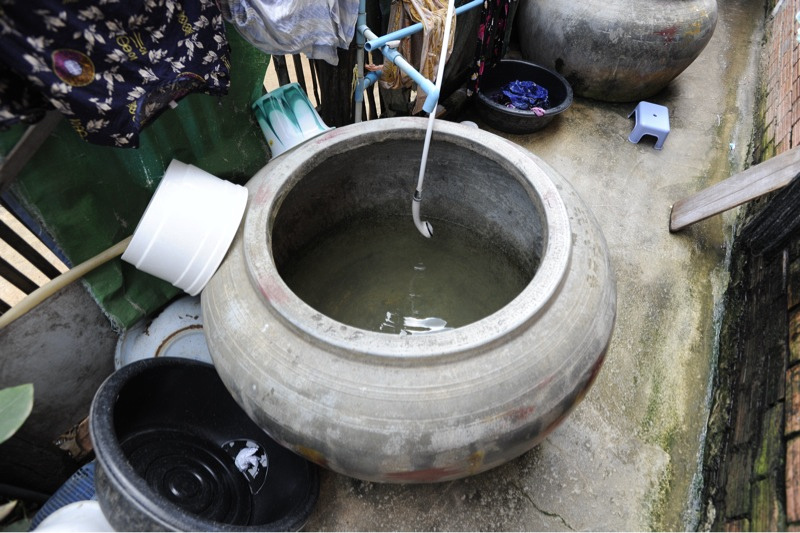 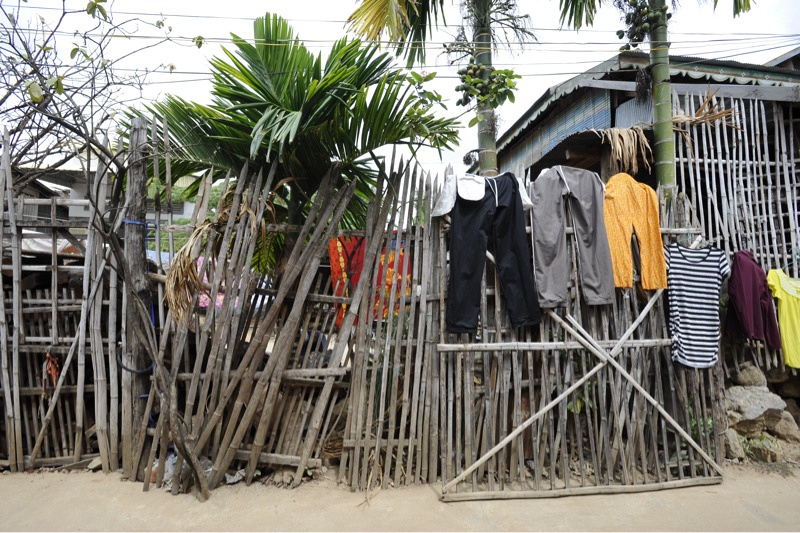 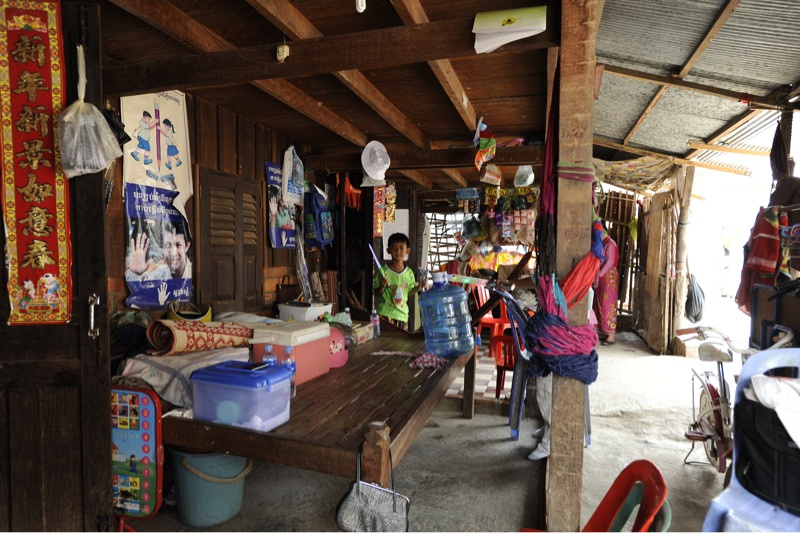 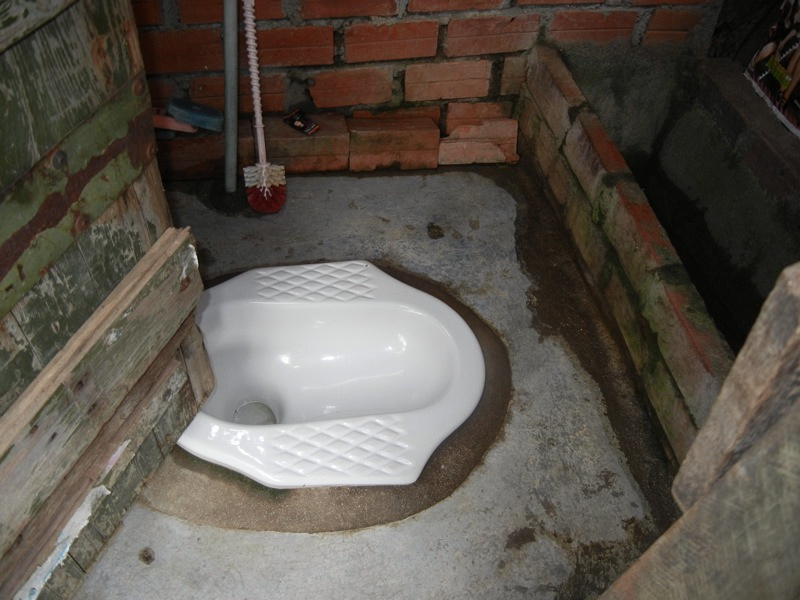 At some point in the afternoon we decided it was time to start heading back to Siam Reap. Along the way we stopped by Sokphy’s house one more time to say goodbye and afterwards went over to see the Wat (Buddhist temple) where the tombstone is located which contain the ashes of Sokha’s husband who recently passed away. This is the same temple where Rosa and her sisters went to school when they were very young and they had a lot of memories of the place. For example, this is the old schoolhouse where Rosa learned how to read and write in the Khmer language (though not long enough to really become proficient). 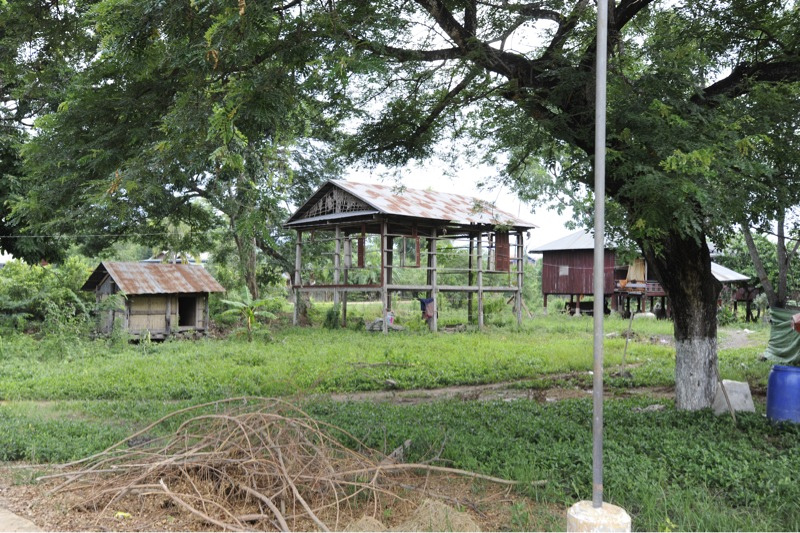 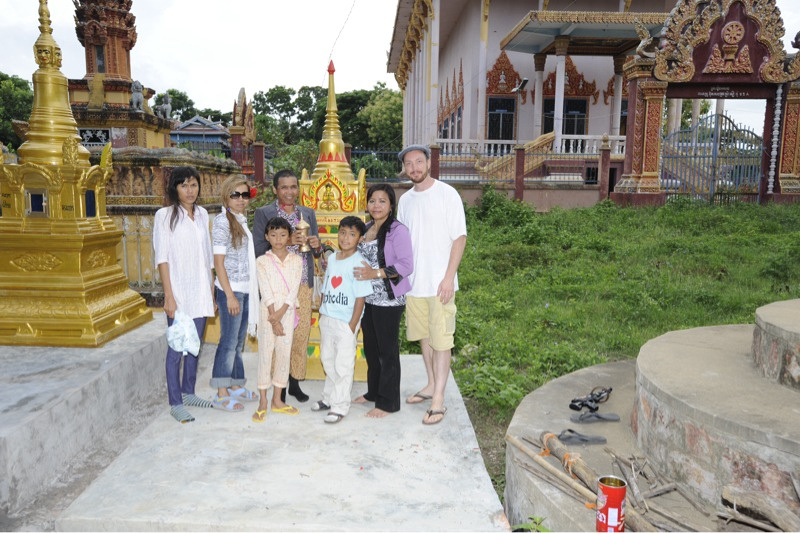 In the back of the temple was the place where the tombstone had been erected. The family gathered around and paid their respects to him. In this picture, the girl and guy are two of Sokha’s children, so this is their dad’s grave. I walked around for just a little bit and took a few pictures. 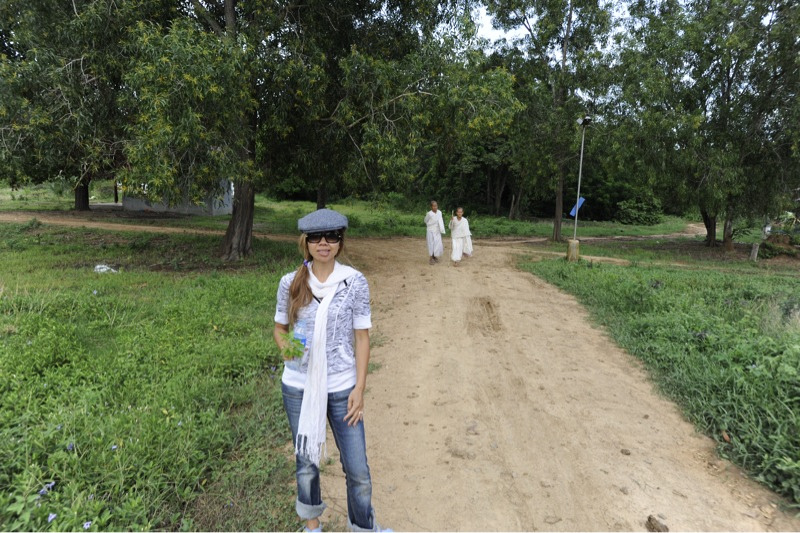 In this one, the old women you see in white are the equivalent of nuns in the Buddhist faith. Here at the Wat is where the community comes together for all kinds of events - weddings, funerals, holidays, school, etc. It is very much central to the way of life over here. One interesting thing about this Wat. During the time when then Khmer Rouge were in control they managed all of the marriages in the village. Rosa’s two sisters, Sokha and Sokphy, were lined up with 8 other girls and 10 guys were lined up across from them. One of the Khmer Rouge leaders walked down the line and paired the girls and the guys together two by two - assigning them to be married. This is how Rosa’s sisters met and married their respective husbands.

Afterwards we went down the road just a little further to the place where Rosa’s grandmother was buried. There really isn’t anything marking the spot any more, just memories, but they left an offering for her there anyway. It’s now a rice field and gave me a good opportunity to get close to the fields for some pictures. It was really a very beautiful place. 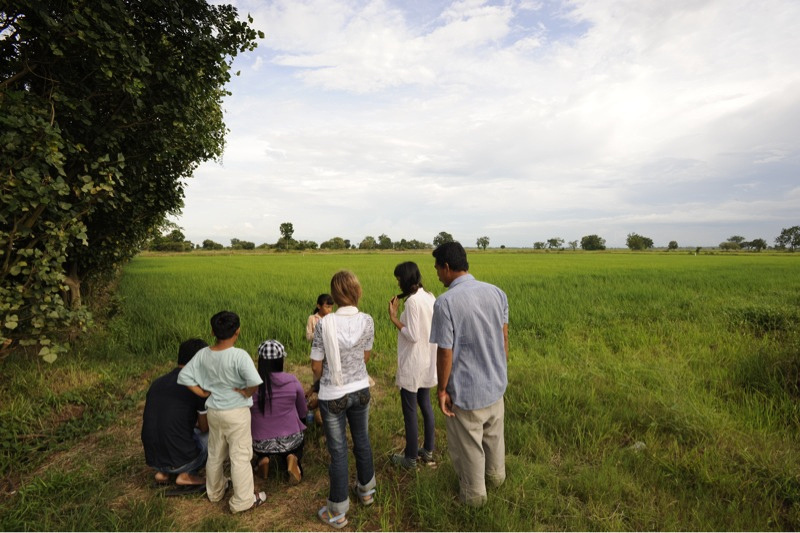 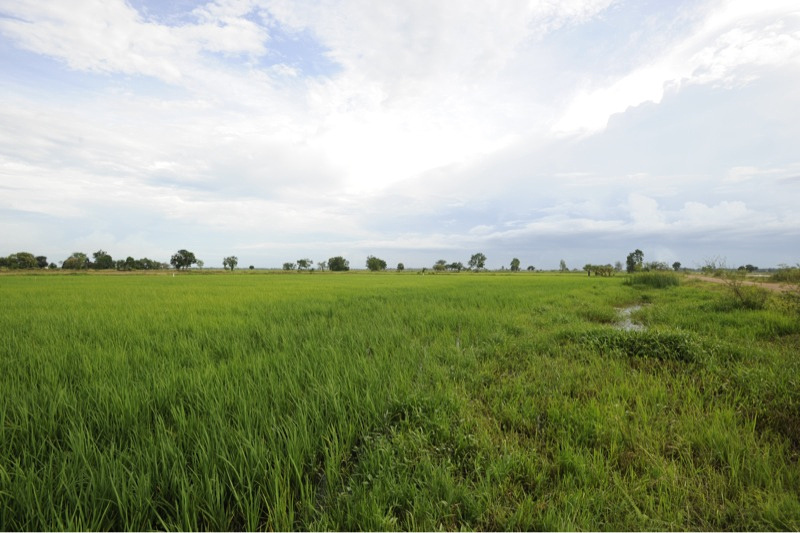 When we finished there we went back to the main road and started back to Siam Reap. I’ve described getting around the city as “organized chaos”, but driving down the highway is more like barreling down a mountain. Rosa’s nephew-in-law, the dentist taxi driver, pretty much drove down the road constantly honking the horn and dodging around trucks, motorcycles and ox drawn carts alike. The road was actually quite good so there weren’t too many pot holes to dodge as well, but it made for an interesting drive. 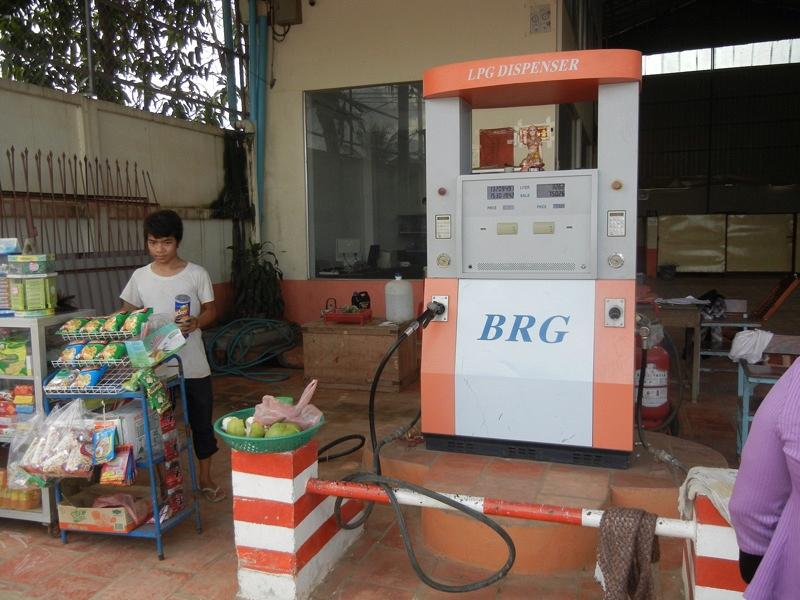 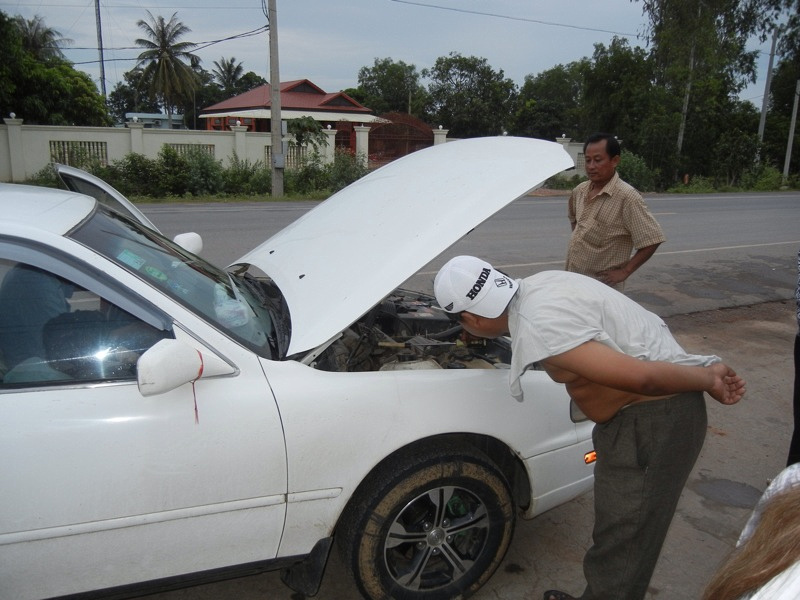 Here’s another interesting thing about the country. There are not a lot of cars here, but the ones that are either use regular gasoline or have been converted to use propane. From what I am told, the rich use gasoline as kind of a status symbol since it costs about twice as much to fill up the car as propane. The propane stations are kind of scattered around and they fill up the tank by using a compressed tank and forcing the gas in through a nozzle in the trunk. We stopped at a place to fill up on the way home and while they were filling up the tank, Rosa’s sister Solarina noticed that the car was left running (the owner had gone off away for a smoke) and turned off the ignition because she was afraid of it catching on fire or something like that. I can’t say I blame her since this is how we are used to doing it in America with regular gasoline. Anyway, because the engine was off there was no pressure in the tank and as a result it was over-filled. When our nephew came back and noticed that the car was off he panicked a bit and sure enough, the car wouldn’t start. The owner of the station came over and a few other people and they all started working on the problem. In the end they had to release some of the gas to finally get it started again, but all was well.

One thing that happened as a result of the delay though was we were now finishing the last 20 km or so in the dark. Driving at night was just as interesting because instead of honking the horn at everything and everyone, he flashed his blinkers and high beams on and off as he drove. I admit it was a little scarier given that you couldn’t see very far in advance, and I’m pretty sure the other drivers didn’t appreciate him using his high beams as the default - but it all worked out and we arrived back and the hotel safe and sound. Rosa and I checked into the same room we had before and it kind of had that “we’re home” feeling. We ordered room service and Rosa went right to sleep. I stayed up reading and watching a little tv then turned in myself.

Mom & Dad(non-registered)
It was a shock to see Rosa in the hospital bed. You have both been in our prayers this whole trip and will continue to be. Rosa, we hope you are starting to feel a little better. We are enjoying your blog and the pictures. It's fun to get a day-to-day rundown. Can't believe the price you are paying for your hotel! We paid more than that in Scotland. Love to you both.
No comments posted.
Loading...
Subscribe
RSS
Recent Posts
Nephi Was Commanded to Build a Boat The Final Leg Off the Grid Of Clean Feet and Water A Good Sabbath The Final Four Rest and Recuperation A Humble Abode A Rung Bell A Bit of a Homecoming
Archive
January February March April May June July August September October November December
© The Shurtz Family
Powered by ZENFOLIO User Agreement
Cancel
Continue