I’m afraid there isn’t much to report on the day yesterday. From the update you already know that I took Rosa to the hospital to have her checked out. The thing with Bells palsy is you basically just need to wait it out. This time is a little different than 4 years ago because of the pain behind her head, but unfortunately there’s not much that can be done to speed the process along. The medicine they gave her seems to be more for neurological issues (vs. the steroid treatment she got last time) so we’ll see how long it takes to get things more or less back go normal. Outside of the drowsiness caused by the medicine, Rosa does seem to be doing better today. 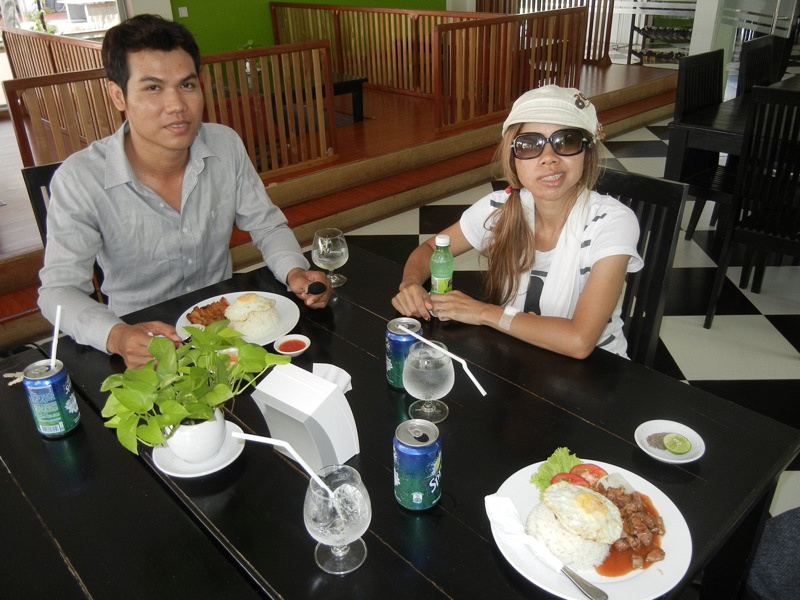 After we got released we grabbed a quick bite to eat and then went back to the hotel. Rosa slept for a little while longer then decided to try a head massage. While she was doing that I went swimming and generally just soaked it all up for a little while. The pool was perfect and it felt incredible in it. Dinner back in the room and then Rosa went to bed and I finished reading my book.

By the way, I decided that if we ever come back here to live I will open up a real American restaurant and show these people what non-Cambodian food supposed to look and taste like. :-) I ordered something called a “Grilled Cubano Sandwich”. I’m not sure what a “cubano” is, but the description was this, “With smoked pork and Gruyere cheese, served with French fries and coleslaw”. Sounds pretty good right? I was in the mood for something a little closer to home and I can see what this should look like in my mind - and let me tell you, it looks pretty good. Come over to the house sometime and I’ll make you what I’m talking about and your taste buds will thank me.

Anyway, you know those sandwich presses that are advertised as a hot pocket-like machine and kind of have the feel of a waffle iron? The ones where you put in a regular slice of bread, load on whatever, and another slice and then clamp it down? This is what they gave me, though by “smoked pork” they really meant, “single slice of bologna”. I suppose it was cubano cheese, though to be honest I’m not sure what that is. I don’t think it is a cheese meant to be melted. It was already mostly cold when they brought it up and the bread was a bit, limp. The fries were ok but the coleslaw was, um, not coleslaw. It had the right look and basic ingredient (cabbage) but that was it.

It was during this meal that I decided I would make my fortune by opening up restaurant here and doing it right. It may only appeal to the foreigners, but at least I could always get a good burger when I was craving it. Oh, and of course a shave ice stand on the side. :-)

Since I’m in a rambling mood, let me tell you about the tv stations over here. I’ve had quite a bit of time to flip through the channels over the last few days and I have a couple of observations that you may or may not find interesting. Cambodia is actually a pretty diverse as far as cultures and nationalities. For example, Japan has been very involved in the restoration of the various ancient temples for many years now and has had some influence and we’ve met tourists from Japan, Korea, Australia, and Russia (just a small sample I’m sure). The cable tv has stations from Thailand, China, Korea, America, Russia, India and of course Cambodia. Some of them are dubbed in the Khmer language, some are left in their native tongue.

Music has always been a part of the Cambodian culture and for as long as I’ve been involved with the people I’ve observed their great love of their music, especially in the form of karaoke. Over here there are no less than two stations (usually more) at any given time dedicated to showing Cambodian karaoke, not to mention those showing music videos in other languages (Korean and Thai seem the most popular). In fact, there are places here where you can come and rent a private room filled with disco lights and a large screen with all of your favorite songs projected onto it. You’re provided with microphones and plenty of food and drink and away you go - singing to your hearts content.

You may be asking yourself, how does he know so much about this? Has he frequented such establishments? The answer is yes, kind of. Last Saturday night Rosa’s sister wanted to take all of us to sing karaoke so we got dressed up and took the tuk tuk over to the place. It was after dark and the one we went to was lit up and full of flashing lights. We had greeters waiting for us as we went in and others waiting to escort us up to the third or fourth floor to one of the rooms described above. I was amazed by the number of workers there to assist us. It seemed every few feet there was someone there trying to help us get comfortable and ready to sing the night away. I’m not much of a karaoke singer so I was more or less just along for the ride - but Rosa walked into the room and immediately decided that she did not have a good feeling and this was not the place for her and she walked right back out the door. I, of course, was right there with her and after much placating of our hosts we all left and went to a restaurant downtown to eat. In the end it was a ton of fun for both Rosa and I because the restaurant we ate at catered specifically to the Europeans and after dinner they had a DJ that played mostly American music and we basically just boogied the night away.

I should also note that Rosa’s sister went to sing karaoke again last night with some of her friends and I saw the video. We didn’t miss much.

Nicole(non-registered)
We're thinking of you Rosa! Hope you are feeling better! Love you guys.
Monica(non-registered)
How cool that you guys can do this! I am so glad you are blogging this trip!
Lynnette(non-registered)
Wow, I hope Rosa is feeling better! It looks like she is being a trooper though and it looks like it hasn't slowed you guys down too much. I love the little insights you're offering about Cambodia. I feel like I'm getting a little history and culture lesson every time I read your blog :) I hope you are having a good day today (since Google tells me it is 3:00 PM right now there). Are Rosa's sisters members? I got wondering that when you talked about stopping by one of the churches. Can't wait to read the next update, have fun and be safe!
No comments posted.
Loading...
Subscribe
RSS
Recent Posts
Nephi Was Commanded to Build a Boat The Final Leg Off the Grid Of Clean Feet and Water A Good Sabbath The Final Four Rest and Recuperation A Humble Abode A Rung Bell A Bit of a Homecoming
Archive
January February March April May June July August September October November December
© The Shurtz Family
Powered by ZENFOLIO User Agreement
Cancel
Continue