Of Clean Feet and Water

[Note: I’ve been off the grid for a couple of days and didn’t get a chance to post this until now. We’re in Phnom Penh now. More on that later.]

Monday was our last full day in Siam Reap and to be honest, I was going a little stir crazy. Rosa still isn’t feeling very great and as a result she spends most of the time in the hotel room resting and so far I’ve pretty much spent it with her. I admit that it has been kind of nice to read and work on some of my side projects, but I feel kind of bad traveling to the other side of the world only to sit in a hotel room and read. After breakfast Rosa went down for a massage and I took the opportunity to get in a workout in and a bit of a swim. When we got back Rosa could tell I was ready to get out and see the world so she had mercy on me and sent me off with Chantha (her nephew) to go see some sites.

Chantha suggested we go to the Tonle Sap and that sounded perfect! It was about 15 minutes drive on his scooter and I enjoyed the trip out there just as much as the lake itself. 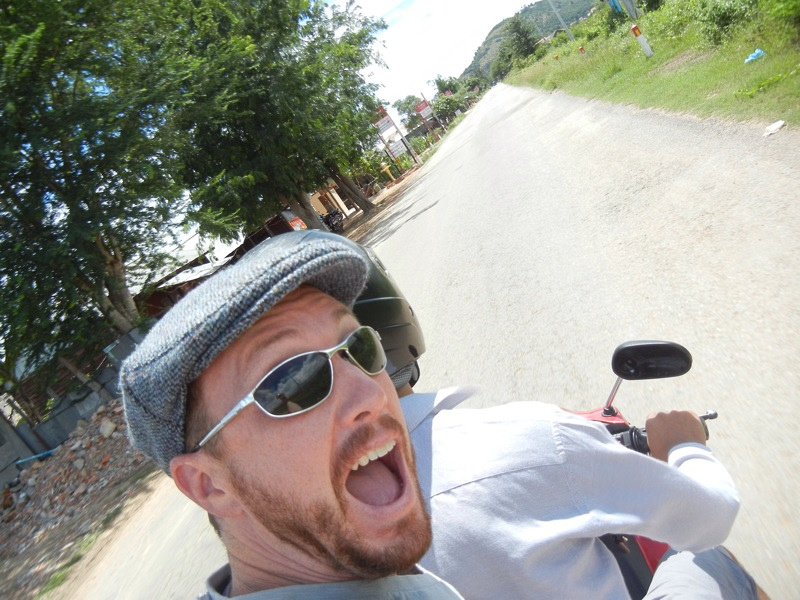 The road out to the lake ran along side a river and I was fascinated by the way that the people live. The homes on the river side of the road were built out on top of the river, their homes built on stilts. On the other side the homes were a bit bigger and a lot nicer. Chantha tells me that because of the frequent flooding down the river and the instability that comes from that, they can’t build the nicer homes over it. Make sense. All I know is I enjoyed every minute of the trip. 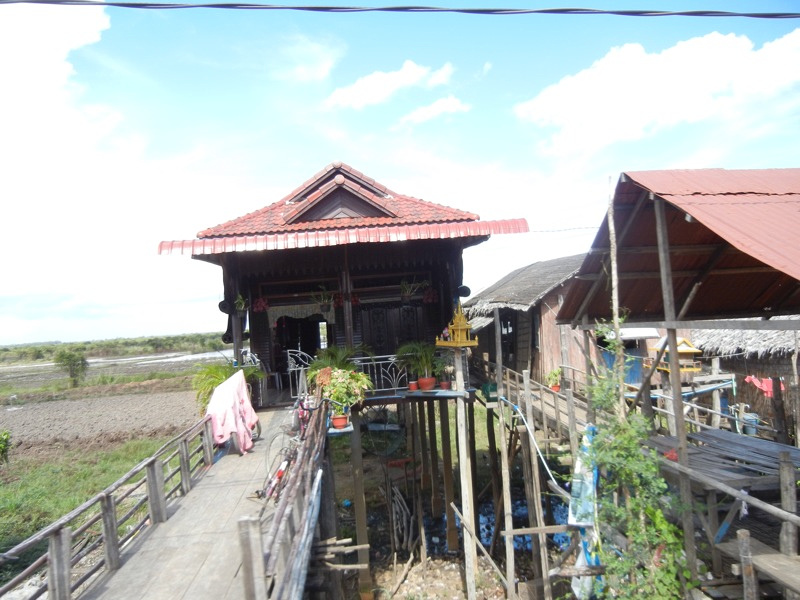 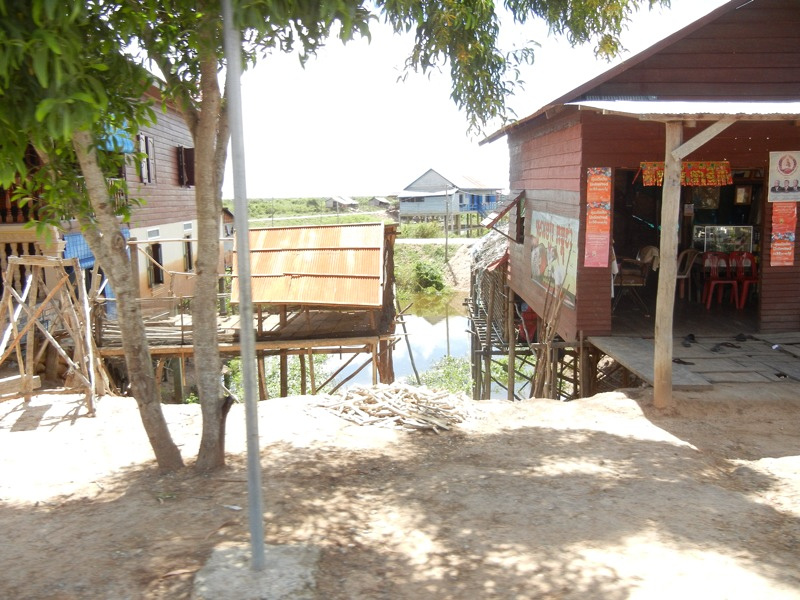 At the end of the road we reached a spot where there was a bit of a tourist center set up where you could purchase a ticket to for a boat that would take us out to the lake. In a way it was like a tuk tuk on the water. Chantha made sure that we had our own boat and we began the trip down the channel. 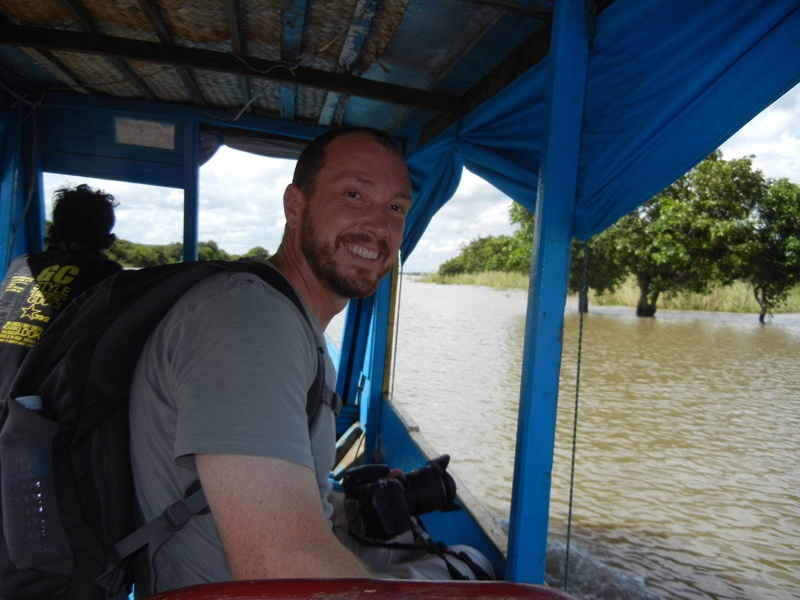 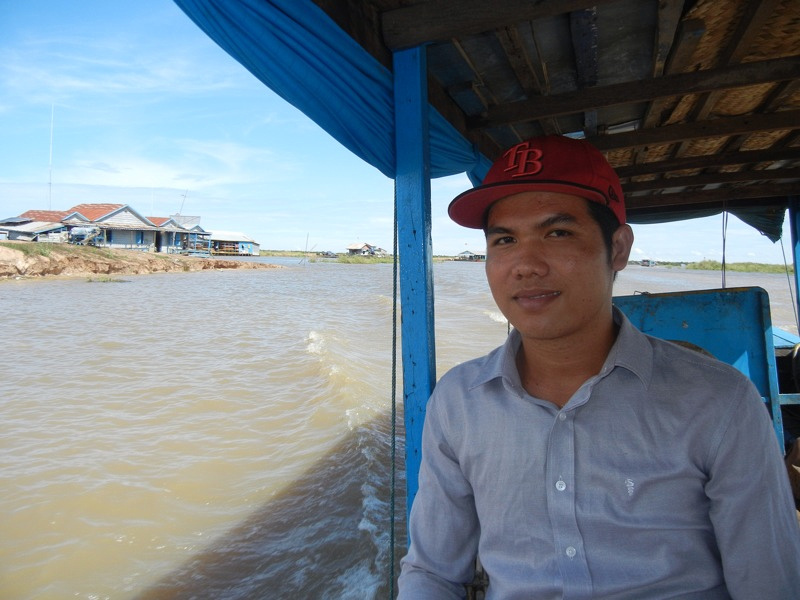 The boat ride out to the lake was very beautiful and even more interesting than the ride over on land. The course through the channel took us through a floating village where people live their lives on the water. Really, it was pretty much exactly like life on land, except, well, they are on the water. There was even vendors of sorts. As we were going down the water, a smaller quicker boat pulled along side ours and a girl jumped over onto our boat with a basket of drinks for sale. It was fun to watch her jump back and forth between the various boats on the river. 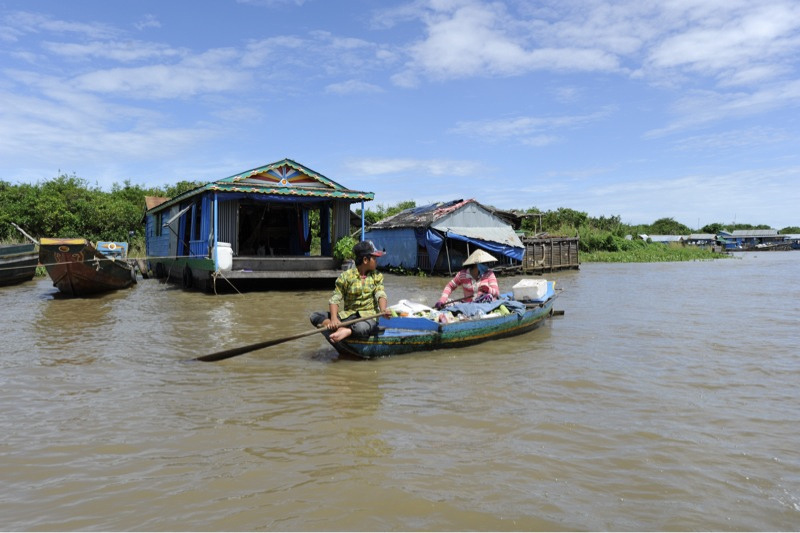 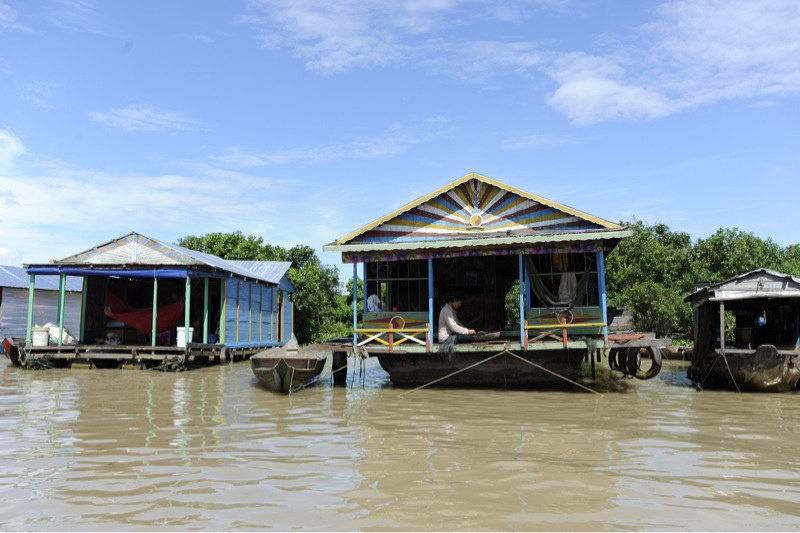 After we had gone through the village we arrived at the lake. It was big. Really big. And brown. And a lake. 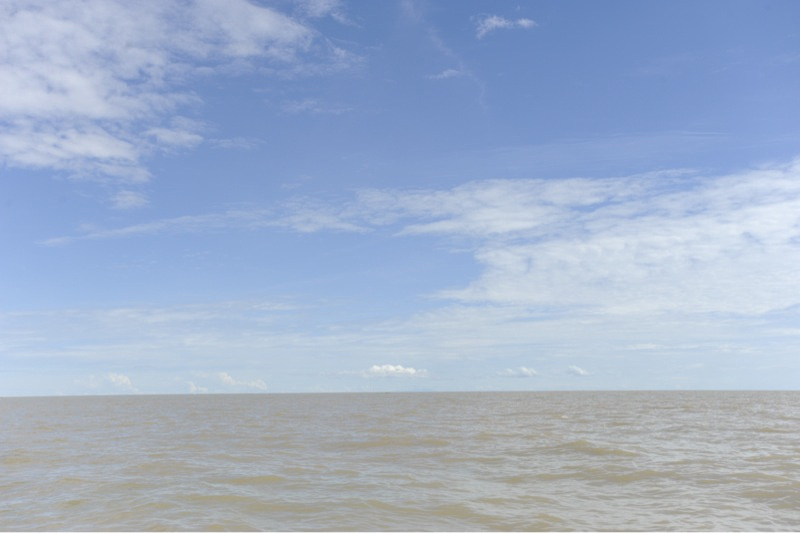 Since there really wasn’t much to see, we turned around and went back through the village. Apparently you can charter boats to go to Phom Penh from there (about 6 hours) or even to Vietnam. Speaking of the Vietnamese, the village has a lot of people from Vietnam, so much that many of the signs were in both languages. We even passed a wedding in progress and the music was in Vietnamese. 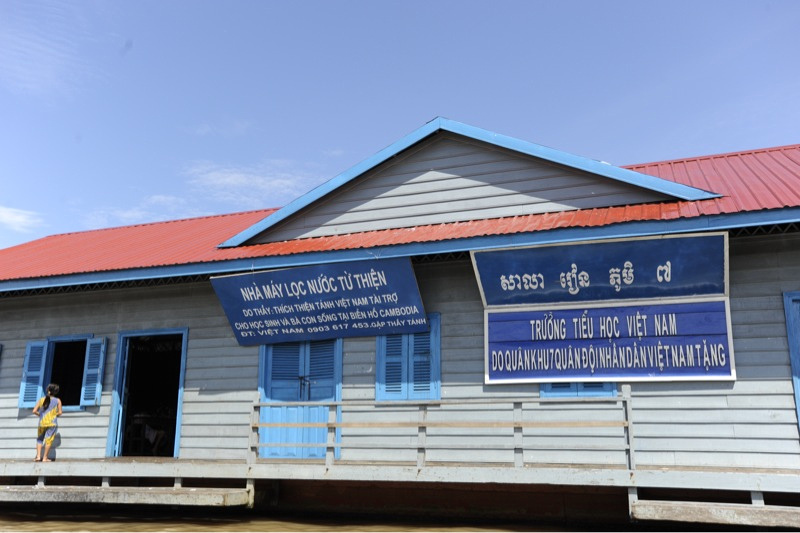 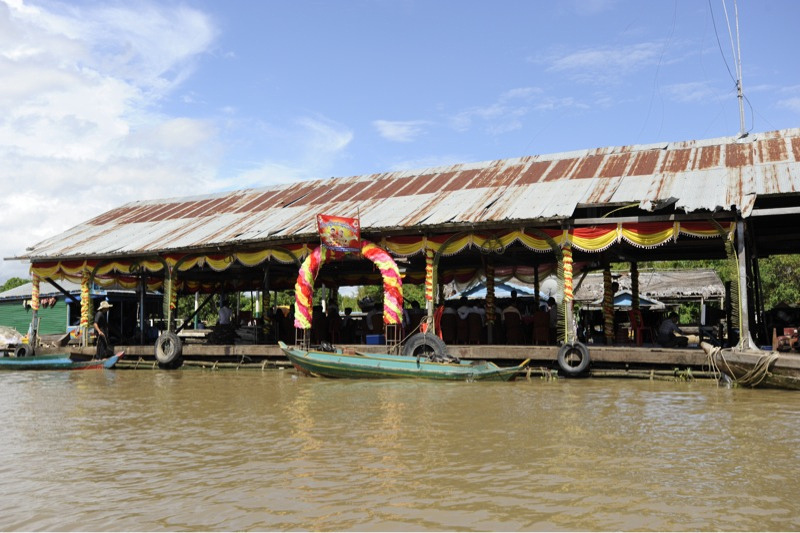 We made one stop in the village to get out and stretch for a few minutes. They had all kinds of things for sale and a little bit of touristy information about the village and lake. They also had crocodiles. 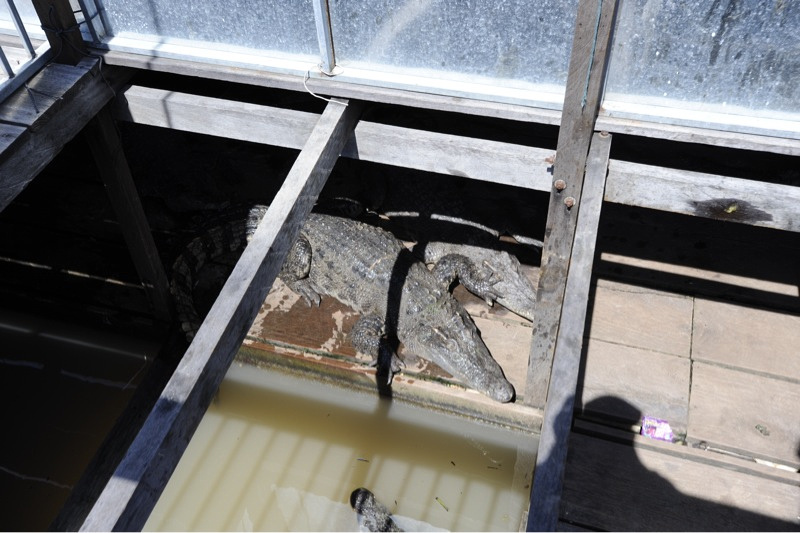 We made our way back to the dock and Chantha and I started our journey back. Along the way we passed a small mountain that had a temple built on top of it. I asked if it would be ok if we went up and away we went. There were stairs built that went up to the top, but we asked one of the men in the village and it turns out that there was a perfectly good road to take us there as well. It was hot and I chose they lazy route. The view at the top was incredible and gave a good look at both the view over the lake and the village we had gone through… well, the village is actually pretty far out there, but this gives you an idea anyway.  That big grey/brown square spot in the middle is where we started in the boat and the village is on the way to the lake. 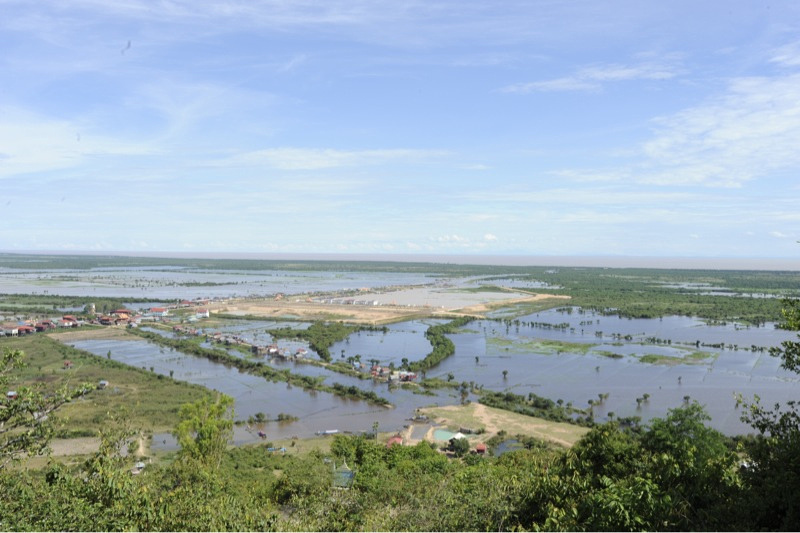 And Siem Reap on the other side… 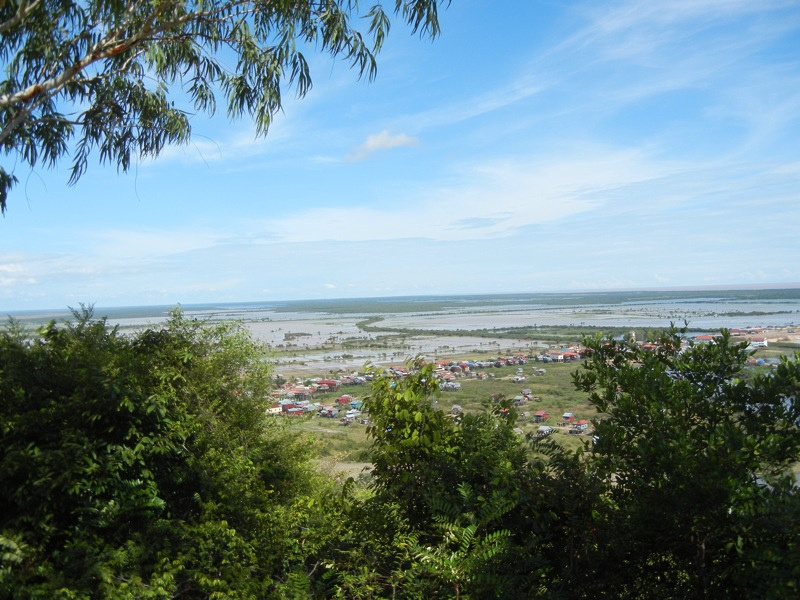 When we got back into the city, Chantha took me by the place where he works. It’s a company called Artisans Angkor and they employ over a thousand people in the area. It was started by a French couple who wanted to help the poorer people of Cambodia be able to learn a skill and earn a living. What they do is make “Cambodian fine arts and crafts” to sell in their shop. We did a bit of a tour through the various shops where people were working, from weaving silk scarfs to silk paintings to wood and stone carving. They did beautiful work and it was impressive to see the various men and women working at their trade. As an example, the silk paintings were done by a group of women who were deaf. The tour ended at a fantastic store where they sold all of the wares that were made at this shop and others like it around the country. I admit that there was a bit of a marketing ploy in the story behind the shop, and the wares were incredibly expensive - but I do feel like they were doing good in the community in helping those who otherwise wouldn’t have any way to earn a living. 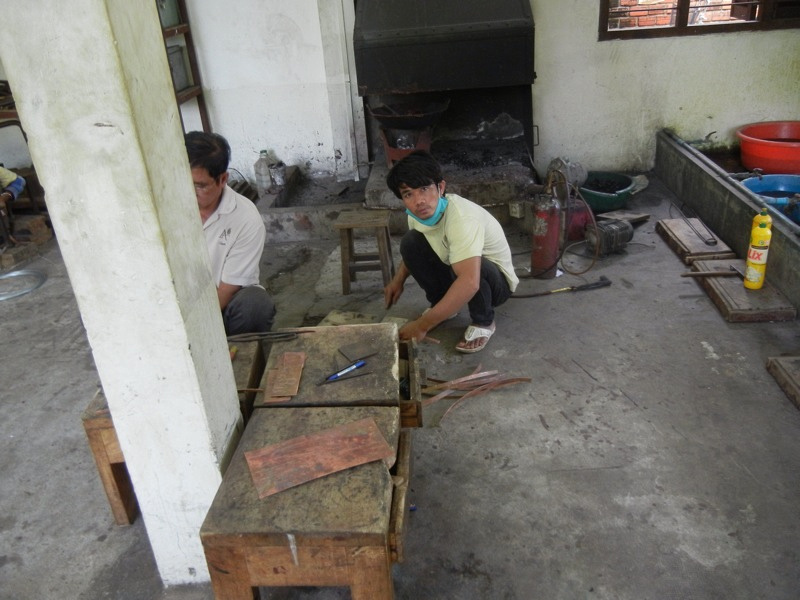 That evening Rosa was feeling up to hitting the night market, so we rented a tuk tuk for the evening and went shopping. There’s not much to tell about the market. It was a market. With lots of stuff. We bought some of it. Probably more than we really needed. 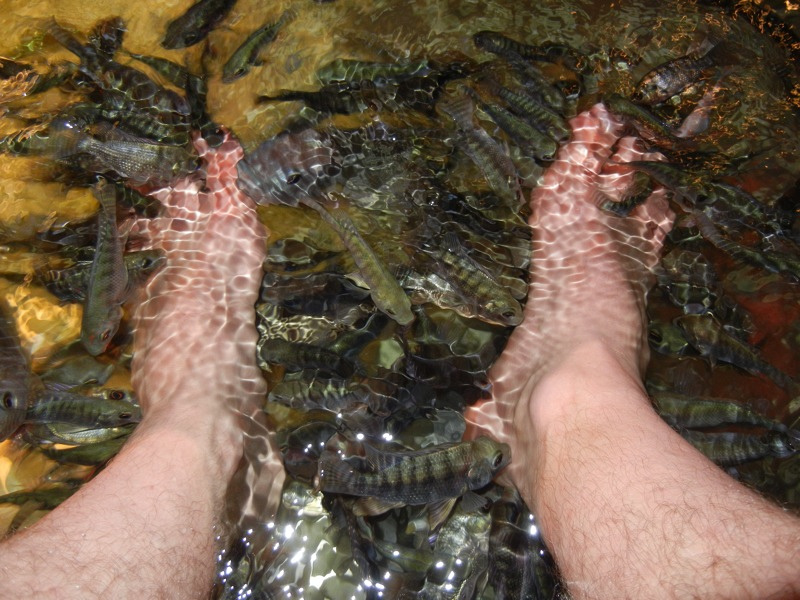 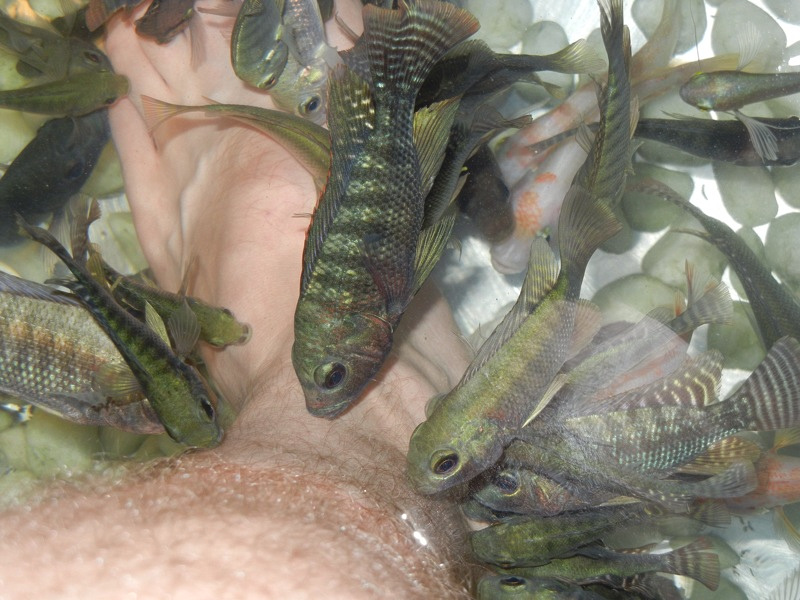 It tickles. A lot. And it’s a little odd feeling all of those little mouths chomping on your toes. I have a video of it that you’ll have to check out once we get home and I can get it uploaded. I’ve become somewhat partial to the dead skin on my feet, so I don’t know if this is something that I will do very often, but it was a cool experience. And now my feet feel fresh and clean and smooth as a baby’s bottom. 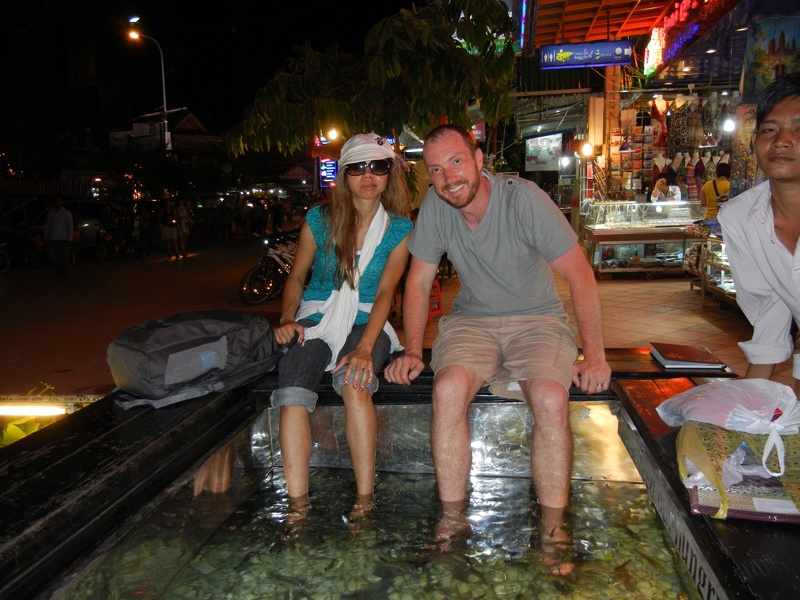 Oh, and you should see the farmers tan I have now! :-)