I’m afraid from a reader’s perspective, the days are getting a little boring. With Rosa not feeling so well we tend to not get out very much and so there isn’t much to show you. However, it was a somewhat interesting day. Rosa’s sister Sokphy has 4 sons that we haven’t yet met. They are working in Thailand right now picking fruit and wanted to come see us before we left. So, we chipped in a little money so they could make the trip down and down they came. They arrived yesterday mid-morning so we were able to spend a little time with them. 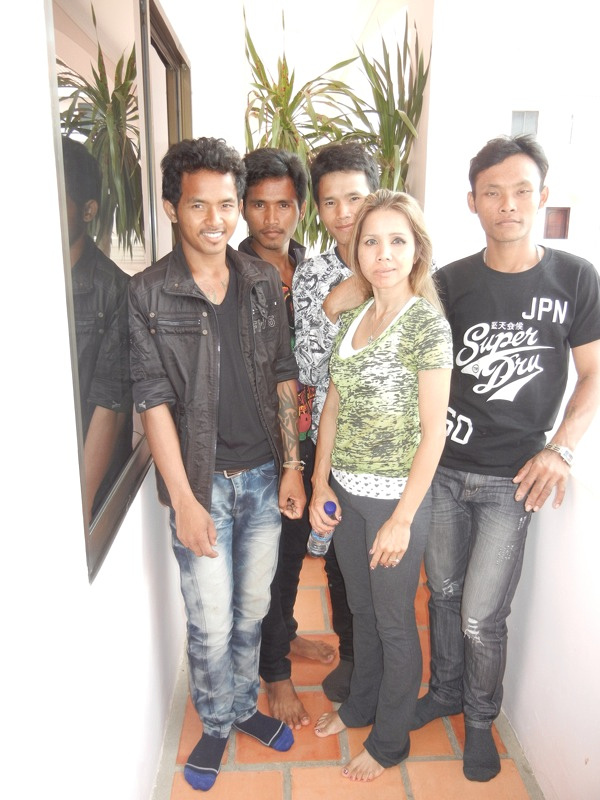 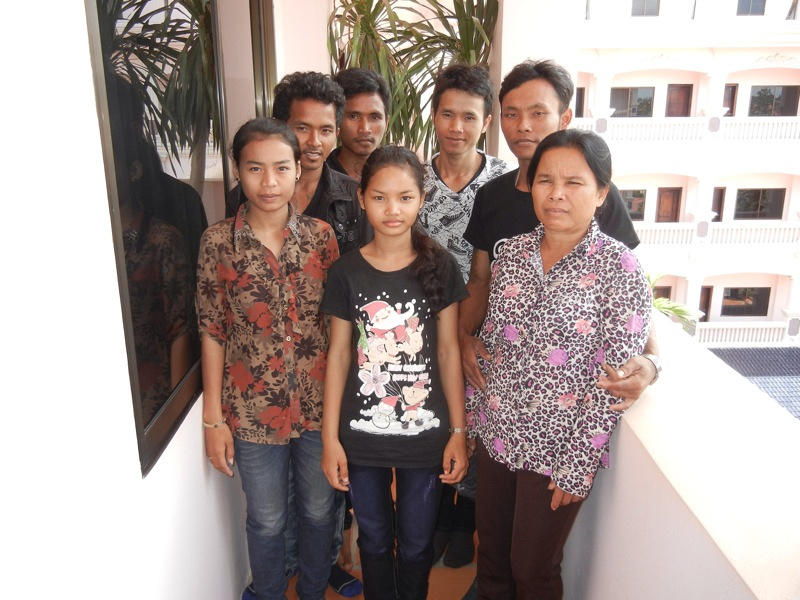 I guess right now it’s hard to find work here in Cambodia and much like the migratory workers in the US, many of the people here will go up to Thailand for the seasonal work picking fruit. Of the four boys, three of them are married but only one of them brought his wife along as well. We spent the afternoon together here in the hotel and played games and got to know each other a bit more. While we were here, a storm rolled in and it rained pretty hard. I tried to get some pictures of it, but I don’t know if I did it justice. 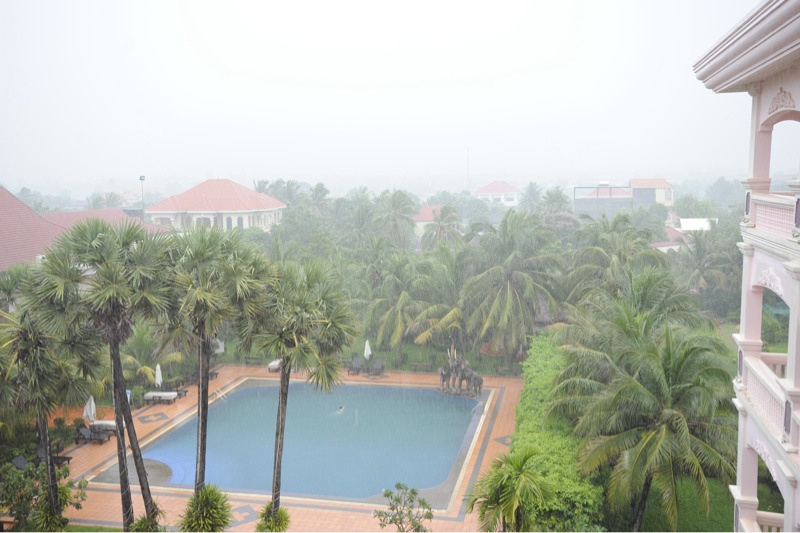 That evening we all went to an all-you-can-eat buffet together. I wasn’t sure what to expect and what we discovered turned out to be pretty nice. It was essentially an all-you-can eat hot pot. 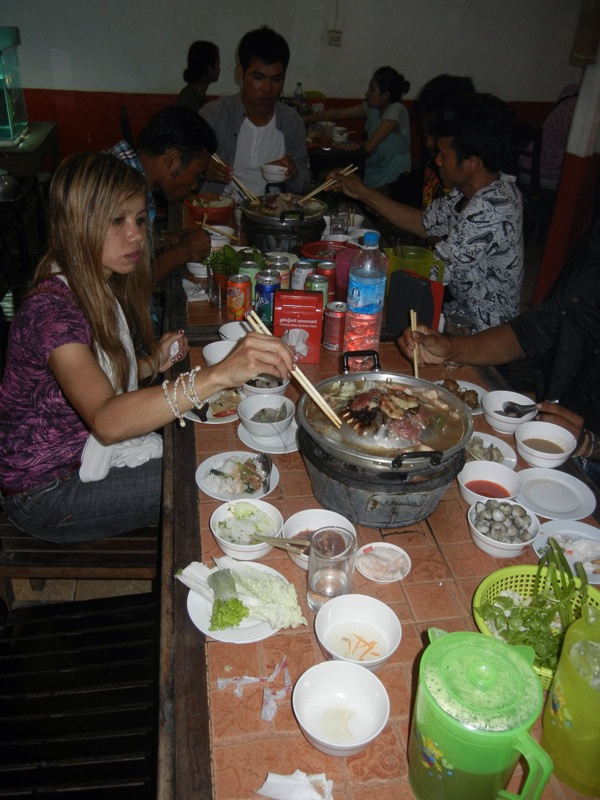 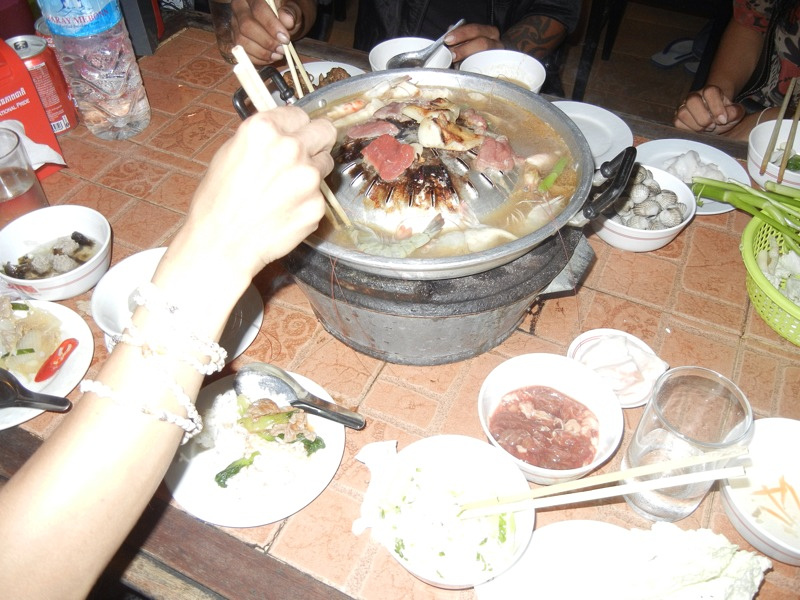 This was something a little unique from the normal hot pot that we do at home in that the pot had what I will describe as a dome surrounded by a moat of boiling liquid. The inside was headed by live coals and so you could cook your meat on the dome itself, or boil it in the water - or both. It was really yummy and I’m afraid I ate more than my fair share. 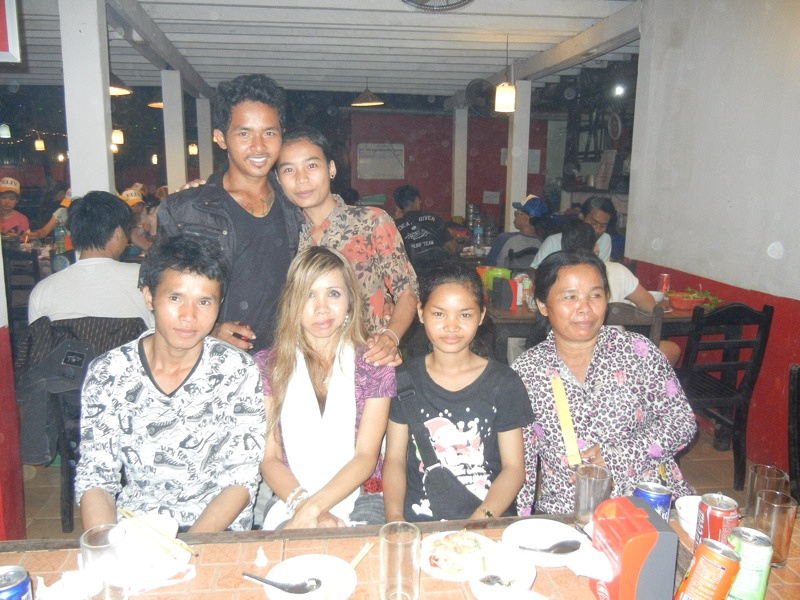 Afterwards Rosa’s sister wanted to take the boys to sing karaoke and we went along for a little while. So, I got to experience the whole room thing again only this time we stuck around for a little while. I thought the sign out front was kind of funny and I was glad that I hadn’t brought any hand-grenades. :-) 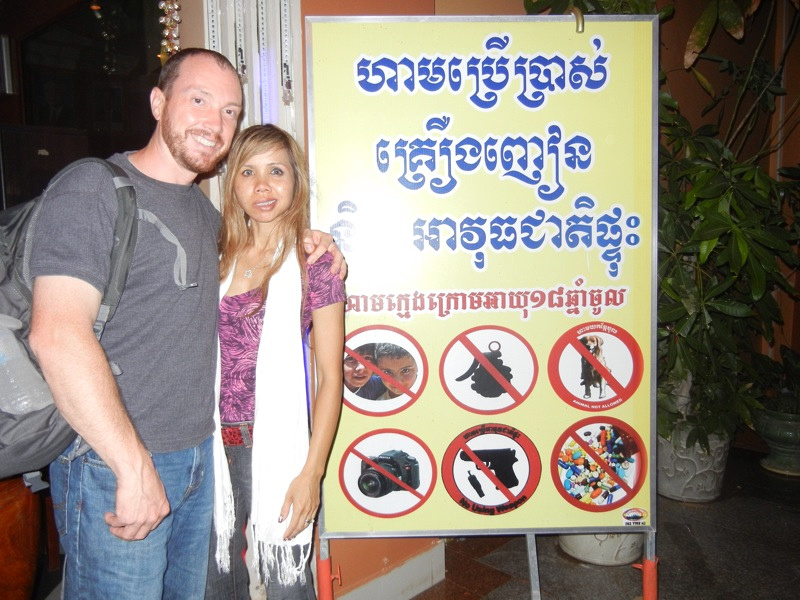 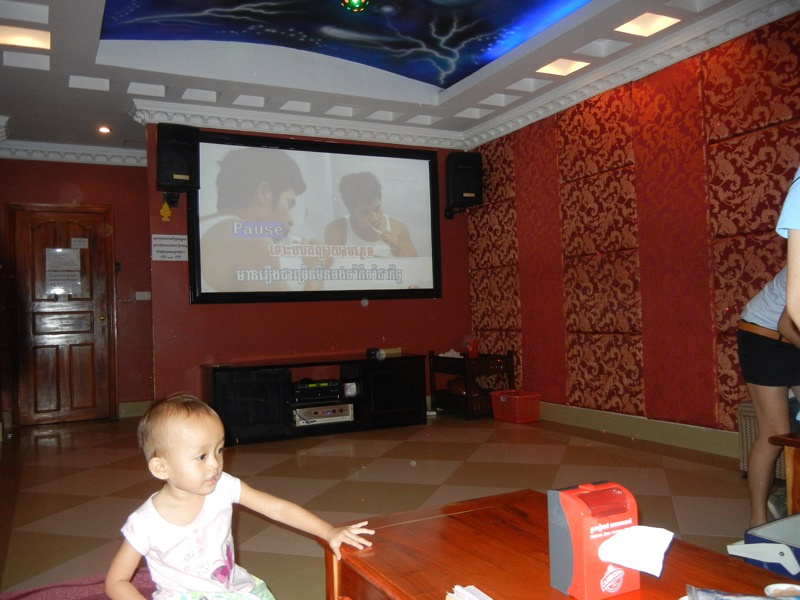 The night ended somewhat on a sad note though. We had only gone through a couple of songs when Rosa’s sister Sokphy got a call from her husband saying that their 16 year-old daughter was missing from their home outside of Battambang. Of course everyone was worried and all kinds of theories were bantered around. After a bunch of phone calls and discussion Sokphy and some of the boys got a ride back home and headed out. The remaining boys left this morning. As of this morning I can tell you that we still don’t know where she is, but they found a note from her saying that she was leaving with her boyfriend to go to one of the neighboring cities. Apparently she took all of her stuff with her so at least they know she wasn’t kidnapped. Still, as a dad of a 16 year-old, I really feel for what her parents are going through right now.

The Shurtz Family
Ha! Yeah, and you'll also notice the 2 year-old in the picture? We had two 8 year-olds and that little girl, so they obviously weren't enforcing the "no kids" policy either. :-)
Jen(non-registered)
So, somehow I missed that you could comment on your blog- I was looking for comments at the bottom, not the top. I was tainted by past experience. Anyway, sorry to hear about Rosa! I really hope that she gets feeling better soon. And it looks like such a good experience. Living conditions kind of remind me of Argentina. Rich or poor, and work the best you can with what you've got. And the toilet on the floor :) And I noticed, also, that you took the picture with a contraband item.
Monica(non-registered)
That food looks so delicious! And, although you didn't bring a hand grenade, I notice you must have taken those pictures with something...


And, I feel terrible! I haven't been on top of reading these (I've been busy making sure your 16 year old doesn't run away with her boyfriend...:)(j/k by the way :) and I didn't realize when we video chatted that Rosa was having these kinds of issues. I feel so bad for not asking about her (sorry Rosa! We love you and I won't neglect to ask in the future!) I hope things start getting better soon!
Lynnette(non-registered)
Sorry to hear about Sokphy's daughter. That really sucks. As the parent of two 2-year olds, I can't relate quite as well as you, but close enough. I hope they hear from her soon.

I'm glad you were able to meet more of the family. And I'm glad you could rest easy that no one was allowed to bring their hand grenades to karaoke night. Maybe they've had issues in the past when there were really bad singers...
No comments posted.
Loading...
Subscribe
RSS
Recent Posts
Nephi Was Commanded to Build a Boat The Final Leg Off the Grid Of Clean Feet and Water A Good Sabbath The Final Four Rest and Recuperation A Humble Abode A Rung Bell A Bit of a Homecoming
Archive
January February March April May June July August September October November December
© The Shurtz Family
Powered by ZENFOLIO User Agreement
Cancel
Continue